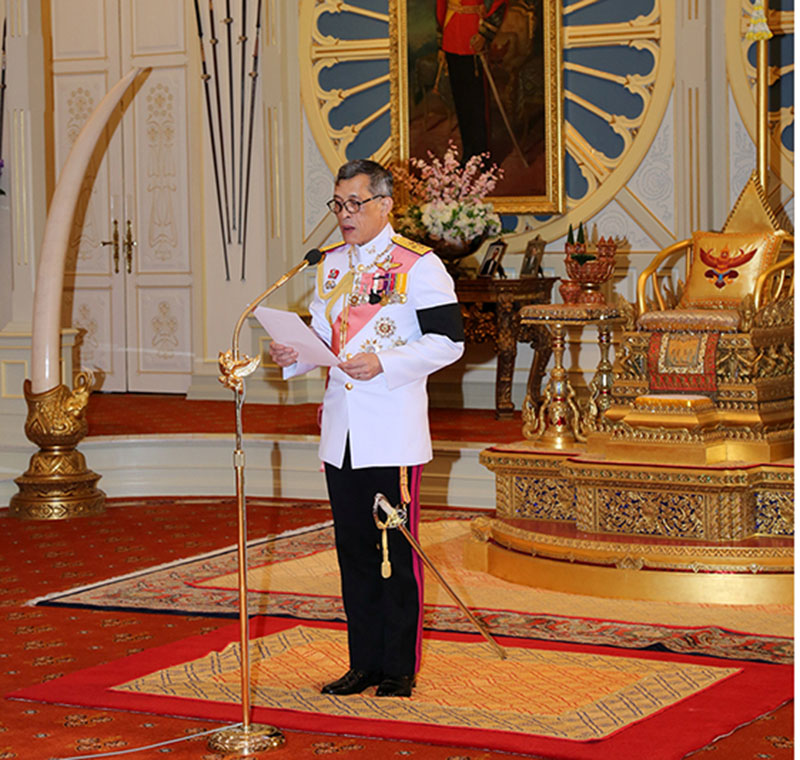 Thailand's new King Maha Vajiralongkorn Bodindradebayavarangkun speaks as he accepts an invitation from parliament to succeed his father, King Bhumibol Adulyadej, at the Dusit Palace in Bangkok, Thailand on Thursday, December 1, 2016. Photo: Reuters
BANGKOK: Crown Prince Maha Vajiralongkorn, 64, became Thailand's new king on Thursday after he accepted an invitation from parliament to succeed his father, King Bhumibol Adulyadej, who died in October. King Bhumibol, 88, was widely loved and regarded as a pillar of stability during decades of political turbulence and rapid development in the Southeast Asian nation. Prince Vajiralongkorn, who will be known as King Maha Vajiralongkorn Bodindradebayavarangkun, according to a statement released by parliament's public relations department, met Pornpetch Wichitcholchai, president of the National Legislative Assembly, at Bangkok's Dusit Palace. "I would like to accept the invitation for the benefit of the Thai people," the new king said in a televised statement. His ascension will likely allay worries among some analysts that the kingdom was headed for a period of instability following the death of King Bhumibol, according to a senior Western diplomat who declined to be named because speaking about the royal family is a sensitive matter in Thailand. "This royal succession highlights a desire for stability and continuity in Thailand," he said. Thailand has been without a monarch since King Bhumibol's death with the head of the king's advisory council, Prem Tinsulanonda, 96, serving as regent. King Bhumibol was widely loved and regarded as a pillar of stability during decades of political turbulence and rapid development in the Southeast Asian nation. The new King Maha Vajiralongkorn has yet to command the kind of adoration that his father received from Thais and he has kept a much lower profile throughout most of his adult life. NEW KING King Maha Vajiralongkorn - who will also be known as Rama X, or the 10th king of Thailand's Chakri Dynasty - takes the throne at a tumultuous time for Thailand, a long-time US ally in Southeast Asia. The military toppled an elected government in 2014 and enforced a political calm in a country divided by more than a decade of conflict between a military-backed royalist establishment and populist political forces. In times of crisis, the palace has occasionally acted as a final arbiter. The late king's image as a truce-maker peaked after violent clashes in 1992 between pro-democracy activists and the army. King Maha Vajiralongkorn has spent much of his adult life abroad and has a home in Germany. Over the past few years, however, the he had taken on more of his father's ceremonial duties while the late king received medical treatment. Public events, including two cycling events in 2015, organised by the palace, have portrayed Maha Vajiralongkorn as a devoted father and family man. "Some people have pointed to the monarchy as a stabilizing force in Thai politics," said David Streckfuss, an independent academic specializing in Southeast Asian studies. "Because of the popularity and veneration of the previous king it would be hard for any person to step into the role because of expected comparisons," he told Reuters. The new king, like his father before him, is shielded from public criticism by Thailand's lese majeste laws, which carry a penalty of up to 15 years in prison. King Maha Vajiralongkorn's personal life and suitability as king have been the subject of private speculation by Thais and overseas observers beyond the reach of the law. IDOL OF THE PEOPLE One of King Maha Vajiralongkorn's first acts as monarch will be to endorse a constitution drafted by the military that the public overwhelmingly endorsed in an August referendum. The royal endorsement is a formality. The junta has said the constitution will pave way for an election in late 2017. Prime Minister Prayuth Chan-ocha said in a televised statement that the new king's coronation would "be at his discretion" and would not take place until after a royal cremation for his father next year. "May all the Thai people unite to pray that the powers of King Bhumibol and past kings protect the new king so that he may long reign as an idol and guardian of the Thai people," Prayuth said
#Thailand #Prime Minister Prayuth Chan-ocha #King Bhumibol Adulyadej #Maha Vajiralongkorn #Chakri Dynasty #National Legislative Assembly
You May Also like: