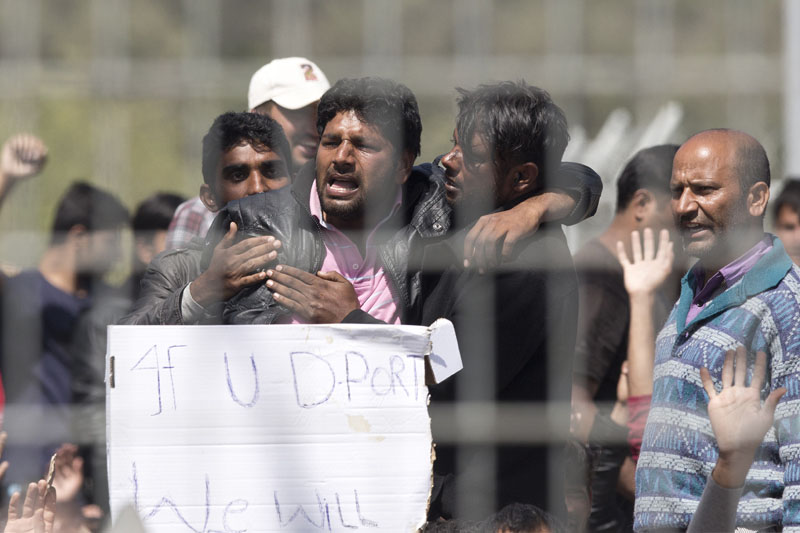 Refugees and migrants most of them from Pakistan protest against EU- Turkey deal about migration inside the entrance of Moria camp in the Greek island of Lesbos on Tuesday, April 5, 2016. Photo: AP
ATHENS: Turkey's prime minister says the country has sent 78 Syrian refugees to Europe on the first working day of a European Union plan to curb migration. Prime Minister Ahmet Davutoglu said of the 202 migrants returned Monday from Greece to Turkey, 199 non-Syrians were taken to a deportation center in northwest Turkey. He says an unaccompanied minor was put into the care of the Family Affairs Ministry and two Syrians were sent to an admissions center in Izmir. Under the deal, migrants who reach Greece from March 20 on will be sent back to Turkey unless they qualify for asylum. For every Syrian returned, Europe will take a Syrian refugee from Turkey to be resettled in an EU country. Davutoglu said the new policy should deter illegal migration and "the Aegean Sea will cease to be a graveyard for migrants." Hundreds of migrants have drowned this year trying to cross from Turkey to Greece in smuggling boats.
#Syrian refugees #migrants #Europe
You May Also like: