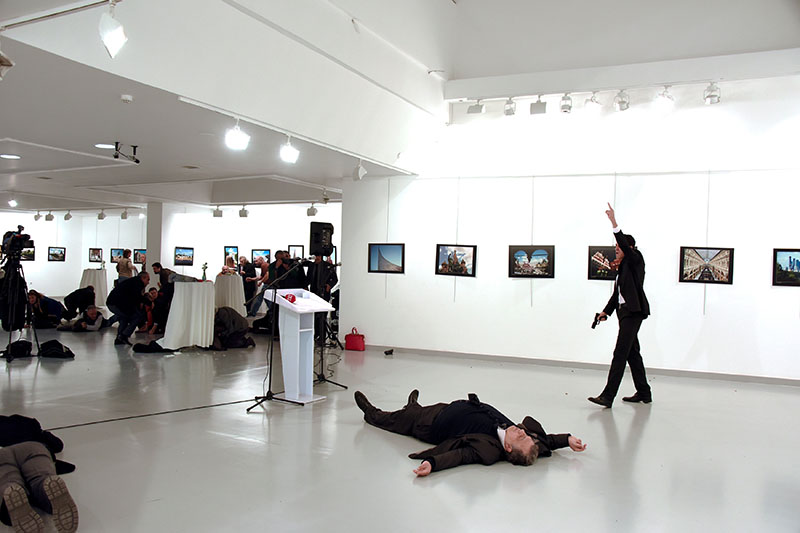 Russian Ambassador to Turkey Andrei Karlov lies on the ground after he was shot by Mevlut Mert Altintas at an art gallery in Ankara, Turkey, on December 19, 2016. Photo: Sozcu Newspaper via Reuters
ISTANBUL: Turkish prosecutors are investigating why the off-duty policeman who shot dead Russia's ambassador to Turkey was not captured alive, state media said on Wednesday, as the number of people arrested over the killing rose to 11. Ambassador Andrei Karlov was gunned down from behind while delivering a speech in an Ankara art gallery on Monday. His killer was identified by Turkish authorities as Mevlut Mert Altintas, 22, who shouted "Don't forget Aleppo" and "Allahu Akbar" - Arabic for "God is greatest" - as he fired the shots. Russian and Turkey both cast the attack as an attempt to ruin a recent thawing of relations chilled by the civil war in Syria, where they back opposing sides. The war reached a potential turning point last week when Russian-backed Syrian forces ended rebel resistance in the northern city of Aleppo. The state-run Anadolu Agency said prosecutors were investigating why Turkish special forces, who stormed the gallery after the killing, did not take Altintas alive. Initial findings suggest he continued to fire at police officers, shouting: "You cannot capture me alive!" Anadolu said. The officers shot Altintas in the legs, but he continued to return fire while crawling on the ground, it said. President Tayyip Erdogan defended the police actions. "There is some speculation about why he wasn't captured alive. Look what happened in Besiktas when they tried to capture an attacker alive," Erdogan told reporters, referring to twin bombings this month outside the stadium of Istanbul's Besiktas soccer team. Forty-four people, mostly policemen, were killed and more than 150 wounded in the dual bombing, the second of which saw a suicide bomber detonating explosives while surrounded by police. A Reuters cameraman at the scene of Monday's killing of the Russian envoy said he heard shooting from inside the art gallery for some minutes after special forces stormed the building. Anadolu also said the number of people detained in connection with the killing had risen to 11. Security sources told Reuters on Tuesday that six people - including Altintas's mother, father, sister and flatmate - were in custody. At Russian President Vladimir Putin's request, a joint Russian-Turkish investigation team has been set up. The Russian contingent is made up of 18 officials, including a prosecutor and two defense attaches, Anadolu said. More than 100 people from the Ankara police department, mostly from the anti-terrorism unit, are involved, it said. The Kremlin said on Wednesday it was too early to say who stood behind the murder of its ambassador. It has also said the assassination was a blow to Turkey's prestige, comments that are likely to unnerve Ankara.
#Russian ambassador #Andrei Karlov #Mevlut Mert Altintas #Turkish prosecutors #Russian ambassador killer #Ankara art gallery
You May Also like: