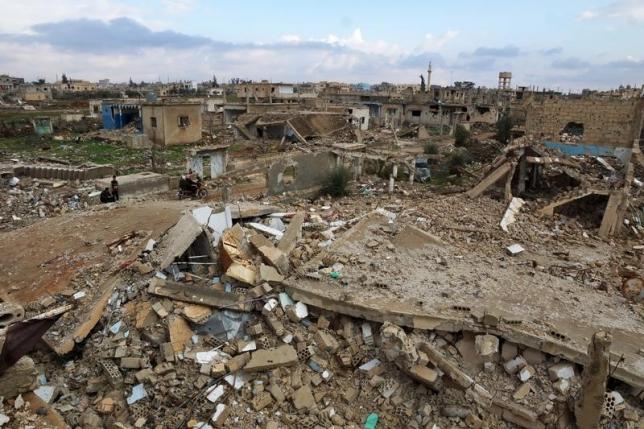 UNITED NATIONS: Russia and the United States circulated to the UN Security Council on Thursday a draft resolution endorsing the planned halt in fighting in Syria and council diplomats said they hoped to adopt it as soon as possible.

The "cessation of hostilities" agreed to by the United States and Russia is due to take hold on Saturday morning from midnight. But opponents of President Bashar al-Assad say they expect the government to press on with its advance, by branding opposition fighters al Qaeda militants unprotected by the truce.

The joint draft resolution, which diplomats say the 15-nation council plans to put to a vote on Friday afternoon, would endorse the halt in fighting and demand that it begin as planned at midnight local time on Saturday morning.

It also "demands that all parties to whom the cessation of hostilities applies ... fulfill their commitments."

Reuters has seen the draft resolution.

The draft further "urges all Member States, especially ISSG (International Syria Support Group) members, to use their influence with the parties to the cessation of hostilities to ensure fulfillment of those commitments and to support efforts to create conditions for a durable and lasting ceasefire."

Damascus has agreed to the deal, as has the main opposition alliance, although it is only ready to commit for two weeks given its deep reservations.

But the government and its allies - including Russia - will be permitted to forge on with strikes against jihadist militants of Islamic State and an al Qaeda-linked group, the Nusra Front.

The draft resolution would also call on all parties in the conflict to grant access to aid workers to ease the country's worsening humanitarian crisis and reiterates the council's support the U.N.-brokered peace talks between the government and opposition.

One of the main purposes of the cessation of hostilities is to allow aid to reach civilians, especially in besieged areas cut off from supplies.

The resolution calls for a resumption of peace talks "as soon as possible (and) ... urges the representatives of the Syrian government and the Syrian opposition to engage in good faith in these negotiations."

The Syria war has drawn in most regional and global powers, with Western countries, Arab states and Turkey forming a coalition against Islamic State while also backing rebels fighting to overthrow Assad. Russia and Iran support him.