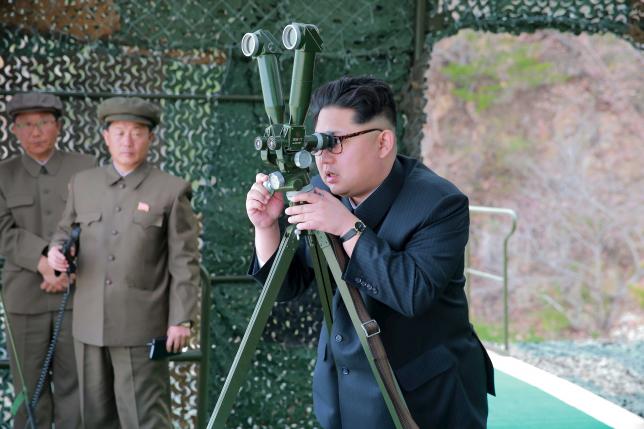 North Korean leader Kim Jong Un guides on the spot the underwater test-fire of strategic submarine ballistic missile in this undated photo released by North Korea's Korean Central News Agency (KCNA) in Pyongyang on April 24, 2016. REUTERS.
The United Nations Security Council on Sunday condemned North Korea's submarine-launched ballistic missile test and expressed serious concern that such activities contributed to Pyongyang's development of nuclear weapons delivery systems. North Korea (DPRK) said the missile test it conducted on Saturday under the supervision of leader Kim Jong Un had been a "great success" that provided "one more means for powerful nuclear attack." "The members of the Security Council agreed that the Security Council would continue to closely monitor the situation and take further significant measures in line with the council's previously expressed determination," the council said in a statement. The submarine-launched ballistic missile test is the latest in a string of recent demonstrations of military might that began in January with Pyongyang's fourth nuclear test and included the launch of a long-range rocket in February. The tests have increased tension on the Korean peninsula and angered ally China. In March, the 15-member Security Council imposed harsh new sanctions on North Korea to starve it of money for its nuclear weapons program. The council called on states to implement sanctions on North Korea, particularly the measures adopted in March. "The members of the Security Council emphasized that the DPRK's development and testing of new ballistic missile capabilities, even if launches are failures, is clearly prohibited by these resolutions," the council said.
#North Korea #UN Security Council #missile
You May Also like: