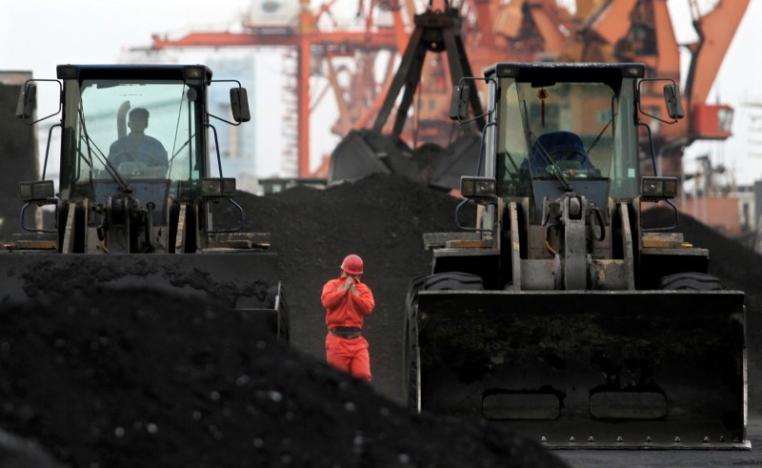 File - An employee walks between front-end loaders which are used to move coal imported from North Korea at Dandong port in the Chinese border city of Dandong, Liaoning province, on December 7, 2010. Photo: Reuters
BEIJING: China's imports of North Korean coal run counter to global sanctions, a senior US official said on Saturday, adding that a US missile system deployed in South Korea should "motivate" Beijing to pressure Pyongyang over its nuclear program.
North Korea's exports of coal to China provide a lifeline for the country and are also seen by the United States as a crucial area where Beijing has leverage over its neighbor, which has carried out a series of missile and nuclear tests in defiance of international sanctions. China announced in April that it would ban North Korean coal imports to comply with UN sanctions, though it made exemptions for deliveries intended for "livelihood purposes". Deputy Secretary of State Antony Blinken told journalists that China had reversed the burden of proof put forward under UN Security Council resolution 2270 adopted in March in response to a North Korean nuclear test. "The plain language of 2270 makes it very clear that the export of coal, or the importation of coal if you are China, is prohibited unless you can demonstrate that the transaction in question goes to the livelihood of the North Korean people," Blinken said in Beijing after visits to Japan and South Korea. "The Chinese have reversed the presumption and their approach has been that the trade in coal is allowed unless you can demonstrate that it is going to the weapons program. But that's not what 2270 says," he said. Coal is particularly important to the economic health of North Korea because it is one of its only sources of hard currency. China imported $1 billion worth of North Korean coal in 2015, according to Chinese customs data. Beijing fears strengthening sanctions could lead to collapse in North Korea, sending a flood of refugees across the border into China, and it also believes the United States and South Korea share responsibility for growing tensions in the region. North Korea's fourth nuclear test in January was followed by a satellite launch, a string of tests of various missiles, and its fifth and largest nuclear test in September. China has repeatedly expressed anger at the United States and South Korea for their decision to deploy the US Terminal High Altitude Area Defence (THAAD) system in the South to counter threats from North Korea. Beijing worries that the system's powerful radar will compromise China's security. Blinken said THAAD "was the latest but not the last defensive step" that the US would take if the North Korean nuclear threat persists, and that hopefully it would "motivate China to work with us to change the conduct of the North Korean regime".
#United States #China #United Nations #North Korean #Pyongyang #US missile system
You May Also like: