Obama points finger at Putin for hacks during US election 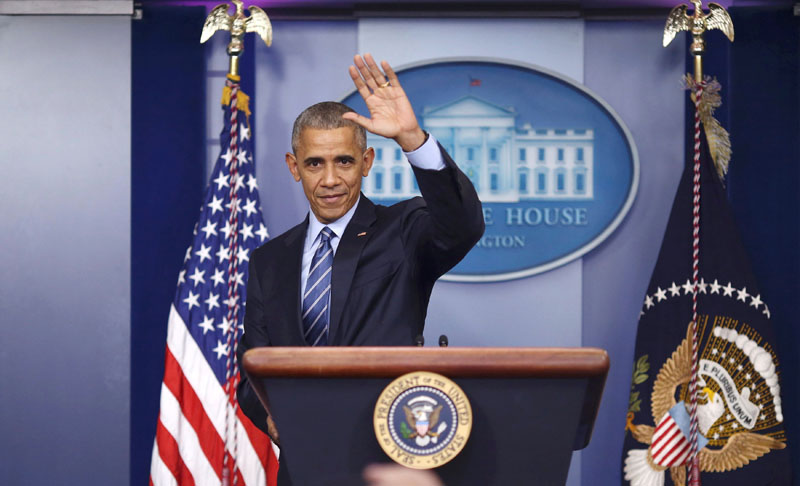 US President Barack Obama waves as he leaves the podium after speaking to journalists during his last news conference of the year at the White House in Washington, US, on December 16, 2016. Photo: Reuters
WASHINGTON: President Barack Obama on Friday strongly suggested that Russian President Vladimir Putin personally authorised the computer hacks of Democratic Party emails that American intelligence officials say were aimed at helping Republican Donald Trump win the November 8 election. But with only a month left in office, during a sombre press conference before leaving for a family holiday in Hawaii, Obama spoke despairingly about the "nasty" state of US politics, saying the chasm between Democrats and Republicans has made it possible for Russia to cause mischief. Obama said he has "great confidence" in intelligence reports he has seen showing that Russians hacked into emails belonging to the Democratic National Committee and to John Podesta, who was campaign chairman for Democratic presidential candidate Hillary Clinton. The leaked emails revealed details of paid speeches Clinton gave to Wall Street, party infighting and comments from top aides to Clinton who were shocked about the extent of her use of a private server to send emails while secretary of state. The leaks led to embarrassing media coverage and prompted some party officials to resign. Obama, who campaigned vigorously for Clinton, said she was treated unfairly and found the media coverage of her troubling. "This happened at the highest levels of the Russian government," Obama said when asked whether Putin was personally involved in the hacks. He added that "not much happens in Russia without Vladimir Putin." Obama said he warned Putin in September to stop meddling in American political campaigns, telling his Russian counterpart to "cut it out" during a face-to-face encounter in China at a Group of 20 meeting. Obama said he did not believe that US electronic voting systems were tampered with. Obama, however, stopped short of directly blaming Putin and said he also wanted to give US intelligence officials more time to produce a report that is due before he leaves office on Jan. 20 and Trump is sworn in as his successor. Retaliation for cyber attacks Obama called Russia a smaller and weaker country than the United States that "does not produce anything that others want to buy, except oil and gas and arms." The comments underscored what Obama called the "sadly deteriorated" relationship between Washington and Moscow, which are also at odds over Russia's role in Syria's civil war and its aggressive actions in Ukraine. Russia has denied US accusations that it was behind the hacks. Two senior government officials told Reuters that the Federal Bureau of Investigation backs the CIA's view that Russia indeed intervened to help Trump win the presidential election. Trump has maintained that he won the election fairly and has bristled at suggestions that Moscow influenced the outcome. But at one point during the heated presidential campaign, he publicly encouraged Russia to hack Clinton's emails. Trump spoke glowingly in the campaign about Putin, and since winning the election he has named top aides who have ties to Russia, including his nominee for secretary of state, Exxon Mobil Corp Chief Executive Rex Tillerson. Obama left open the door to US retaliation against Russia to discourage further cyber attacks - countermeasures that may be up to Trump to implement. Obama said he has had "cordial" discussions with Trump since the election and has stressed that he would do everything he can to ensure a smooth transition. But the outgoing president also criticised Trump's fellow Republicans broadly. Referencing polls showing that more than one-third of Republicans approve of Putin, who used to lead the KGB spy agency, Obama said that conservative icon "Ronald Reagan would roll over in his grave." "In some cases, you have voters and elected officials who have more confidence and faith in a foreign adversary than they have in their neighbours," Obama said. China and Syria Adding to the gloomy tone of Obama's remarks, he addressed two other difficult foreign policy issues that will outlast his time in the White House. Obama warned about the economic and geopolitical consequences of any breakdown in the US-China relationship, and said Trump should think carefully about the diplomatic repercussions if he decides to "upend" longstanding US diplomatic norms. Trump angered China earlier this month when he took a congratulatory phone call from Taiwan's president, Tsai Ing-wen - the first call of its kind since 1979 when President Jimmy Carter acknowledged Taiwan as part of "one China." Obama also condemned attacks on Syrian civilians trying to flee the city of Aleppo, blaming President Bashar al-Assad and his allies in Russia and Iran for "atrocities." Obama defended his decision to keep US troops out of Syria and avoid military intervention, although he acknowledged the protracted anguish has weighed on him. "Everything else was tempting because we wanted to do something and it sounded like the right thing to do, but it was going to be impossible to do this on the cheap," he said.
#Ukraine #Hillary Clinton #President Vladimir Putin #Donald Trump #US politics #President Bashar al-Assad #Barack Obama #Wall Street #Democratic Party #Democratic National Committee #computer hacks
You May Also like: