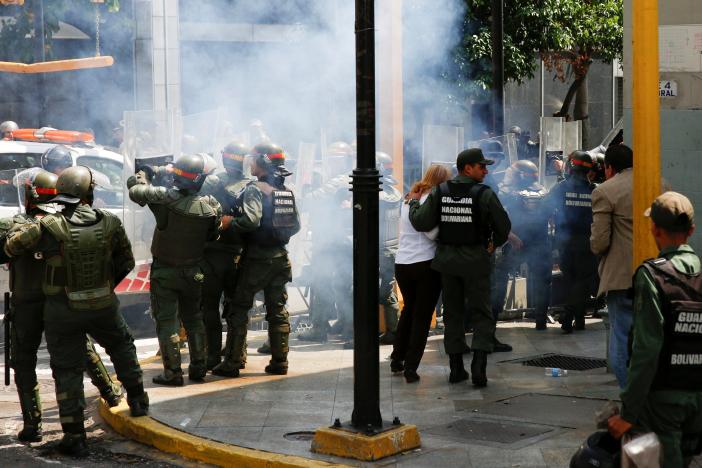 Venezuelan National Guards, escort people as they walk out from the National Assembly after a session in Caracas, Venezuela October 27, 2016. REUTERS
CARACAS: In a curious convergence of events on the same day last week, four Venezuelan provincial courts issued identical rulings, state governors quickly hit Twitter to celebrate, then the election board emailed a short but bombshell statement. Opposition hopes for a referendum to recall President Nicolas Maduro were dashed, on grounds of fraud in an initial signature drive. The vote was off. For many in the opposition, that settled a years-old debate about the nature of Venezuela's socialist government, uniting them in conviction they are now fighting a dictatorship. Their new militancy heightens the risk of unrest as the South American OPEC member of 30 million people grapples with a dangerous economic and political crisis. "Can anyone in the world now really doubt that Venezuela is living in tyranny?" said housewife Mabel Pinate, 62, dressed in white among thousands of protesters who took to the streets against Maduro on Wednesday. "We are sick of this. It's time to toughen up and do what we must to save Venezuela," added Pinate, whose husband was fired from state oil company PDVSA by Maduro's predecessor Hugo Chavez and whose two children have gone abroad. After pinning its hopes on a referendum this year - which could have triggered a presidential election and put them in power after 17 years of leftist rule - the enraged opposition Democratic Unity coalition has taken its gloves off. It is holding a symbolic political trial of Maduro in the legislature, organising daily street protests, and shunning talks with the government that had been announced by the Vatican for this weekend. Recalling tactics that led to a short-lived coup against Chavez in 2002 and a shutdown of the oil industry, the coalition has also called for a general strike on Friday and a march to the Miraflores presidential palace next week. "We've reached the limit," said Henrique Capriles, a usually moderate opposition leader, calling the government "Satan." "Does the opposition have anything to negotiate with the government? Nothing. Why does the government want dialogue? Because the water has risen to its neck," he said. Some hardliners, most notably veteran activist Maria Corina Machado and jailed protest leader Leopoldo Lopez' wife Lilian Tintori, are calling for Gandhi-style civil disobedience. 'I FEAR NOBODY' The government is vowing an iron fist. It says well-known troublemakers, who were behind the 2002 putsch, are again seeking a coup against an elected government, with the help of the United States and compliant foreign media. "I fear nobody and nothing!" Maduro told red-shirted supporters at one of his daily rallies and TV appearances this week. The ruling Socialist Party's No. 2, Diosdado Cabello said any companies heeding the strike call would be seized by workers and the military. "We're not going to allow craziness." Long proud of its democratic credentials after winning numerous elections under Chavez, the ruling Socialist Party says it is the opposition flouting Venezuela's democracy given that independent institutions shot down the referendum. Officials also argue that the very existence of protests and virulent public criticism of Maduro prove democracy is alive and well in Venezuela. Maduro insists the referendum decision was made by independent judges and electoral officials based on technical criteria, and denies the Socialist Party had any sway over the result. But critics say both the judiciary and electoral council have long been in the government's pocket. The Supreme Court has repeatedly shot down legislation passed by the opposition-dominated Congress while interpreting the constitution to favour the executive branch and limit the reach of lawmakers. And the elections council has steadily shifted the requirements for requesting the recall vote. Maduro would have faced probable defeat and removal from power if the referendum had gone ahead. His challenge now is to contain street protests and respond to deep anger among all Venezuelans at the dreadful state of the economy. Food shortages, long shopping lines and runaway prices have eroded the ruling "Chavismo" movement's popularity among the poor and seen Maduro's ratings slide to just over 20 percent. But as unhappy as they are, disaffected former "Chavistas" are not yet ready to throw their lot in en masse with coalition leaders they still view with suspicion. "They are all from privileged families. How can they represent me?" said Orlando Diaz, 47, a mechanic and father of four from a slum in western Caracas who has seen work dry up and income tumble during a nearly three-year recession. "Do I hate Maduro? Yes. He has betrayed the comandante (Chavez), he is a fool. Will I join these people in their crying and marching? No way. Frankly, I don't know where to turn. I don't see a future, I just have to find bread for my family today and tomorrow. That's all I think about." The opposition's challenge is how to incorporate people like Diaz and his neighbours from the gritty hillside Antimano "barrio", into their street push. On Wednesday, they drew hundreds of thousands nationwide, but students and traditional supporters remained at the vanguard. Scores of people on both sides were killed during anti-Maduro protests in 2014 and there was new violence on Wednesday, with dozens of injuries and arrests. A policemen was shot dead in an incident the government blamed on demonstrators. "A recall referendum in 2016 would have meant the automatic exit from power of 'Chavismo'," said local pollster Luis Vicente Leon. "Eschewing democratic codes and values, the government preferred to assume ... the risk of a popular reaction." The next presidential election is due at the end of 2018 and most Venezuelans assume another candidate will emerge from within "Chavismo" instead of Maduro. But given the events of recent days, opposition supporters are beginning to wonder if that election will even take place.
#Venezuela #Hugo Chavez #election board #Nicolas Maduro
You May Also like: