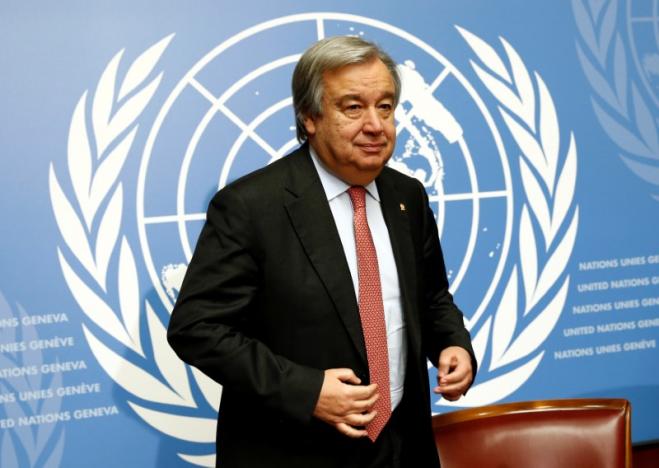 Antonio Guterres, United Nations High Commissioner for Refugees (UNHCR), arrives for a news conference at the United Nations in Geneva, Switzerland December 18, 2015. REUTERS
UNITED NATIONS: A sixth secret ballot by the United Nations Security Council on Wednesday will signal whether former Portuguese Prime Minister Antonio Guterres is likely to be the next UN Secretary-General, or whether one of the five permanent Security Council members might veto his bid. Guterres has come out atop the five closed-door polls since July. The 15-member council is aiming to reach consensus on a replacement for Ban Ki-moon of South Korea, who will step down at the end of 2016 after two five-year terms. However, amid a push for a woman to lead the 71-year-old world body for the first time, European Commissioner Kristalina Georgieva of Bulgaria was a last-minute entry a week ago. It remains to be seen how great a threat she will pose to Guterres, with several diplomats saying her candidacy is too late. She is the 13th candidate to enter the race and the seventh woman. Two women and a man have already withdrawn, leaving 10 candidates in the running. The ballots the five veto powers - the United States, Britain, France, China and Russia - cast on Wednesday will be a different color to those of the other 10 council members, though they will remain anonymous. The vote is informal but it will allow the candidates to see if they could be facing a veto. The Security Council casts ballots for each candidate with the choices of: encourage, discourage or no opinion. In the fifth secret poll on Sept. 26, Guterres received 12 encourage, two discourage and one no opinion. British UN Ambassador Matthew Rycroft said on Tuesday that he hoped, "Russia will join others, and there will be a consensus candidate, and if so then it would be possible to move very quickly to a formal vote." When the council is ready to recommend a candidate to the 193-member General Assembly for election, it will adopt a resolution behind closed doors. The resolution needs nine votes in favor and no vetoes to pass. Russian UN Ambassador Vitaly Churkin, president of the Security Council for October, said on Monday there was a "good chance" the body would hold a formal vote a few days after Wednesday's secret ballot. Even if Wednesday's ballot reveals that Guterres is facing a veto, it may not mean the end of his bid. In late 1996, Kofi Annan of Ghana emerged as a candidate after the United States blocked Egypt's Boutros Boutros-Ghali from serving a second term. France then blocked Annan several times, but eventually backed down. Annan then appointed a Frenchman head of UN peacekeeping.
#South Korea #Ban Ki-moon #Portugal #United Nations Security Council #Antonio Guterres
You May Also like: