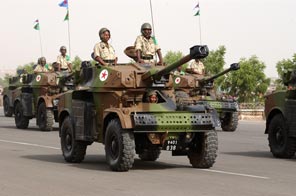 The Al Sagra and Al Abu Hussein tribes clashed with the rebels in Al-Jawf province, east of the insurgent stronghold in Saada, when the rebels tried to take control of a house that belongs to the tribes, Abdullah Al Sagra said.

"Tribes clashed with the rebels, killing 15 of them," said Al Sagra, adding that one tribeman was wounded in the confrontation which lasted around five hours.

"We have the corpses," he said, adding that the remaining assailants had fled the area.

It is the third reported clash in a month between tribesmen and the rebels, who have been fighting fierce battles with the army since August, when the Sanaa government vowed to eradicate their five-year-old uprising.

Sheikh Arfaj bin Hadban, a tribal leader from the region, told AFP that the rebels had "sent hundreds of their fighters to the Jawf to open a new front," in the desert east of their mountain stronghold.