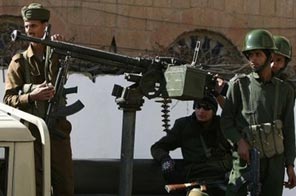 SANAA: Yemeni forces will strike Al-Qaeda extremists for as long as they pose a threat, the interior minister warned, as the Islamist group denied government claims of having killed six of its leaders.
"These strikes will not be the last as long as terrorist elements target state security and stability and institutions," said Major General Mutahar Rashad al-Masri, quoted on Monday by state news agency Saba.
The minister, speaking at a Sunday conference on security, said Al-Qaeda in the Arabian Peninsula (AQAP), had recently suffered heavy losses, including the death of a number of its leaders.
The interior ministry said on Saturday that the AQAP military boss, Qassem al-Rimi, was among six leaders of the group killed in an air strike by Yemeni forces the previous day in the eastern part of Saada province.
Al-Qaeda has denied any of its members were killed in the strike, according to US monitoring group SITE Intelligence Group on Monday.
"None of the mujahedeen were killed in that unjust and insidious raid; rather, some brothers were slightly wounded," AQAP said in a statement on jihadist forums, according to SITE.
"The agent Yemeni government seeks through these pretences to prove a false victory, which it presents as gifts to (US President Barack) Obama and (British Prime Minister Gordon) Brown and their allies in the London Conference, claiming that it has the capability to eliminate the mujahedeen in the Arabian Peninsula," SITE quoted the AQAP statement as saying.
Brown is to host an international meeting on fighting extremism in Yemen on January 27.
The meeting was called days after the failed attempt on Christmas Day by a Nigerian national to blow up a US airliner. The alleged perpetrator, Umar Farouk Abdulmutallab, is thought to have been trained in Yemen, the ancestral homeland of fugitive Al-Qaeda chief Osama bin Laden.
There was no immediate official reaction to the purported Al-Qaeda denial.
There had initially been conflicting reports about the identities of those killed in Friday's strike, in which a Yemeni warplane targeted a three-vehicle convoy in the northern Saada province.
So far, the interior ministry has put up on its website the photos of four of the six said to have been killed, but has provided no proof of their deaths.
A local tribal leader said gunmen presumed to be from AQAP had cordoned off the area, firing at any vehicle that tried to approach.
He said it was probable that the victims of the air strike had probably been evacuated, whether dead or alive.
According to the SITE report, AQAP called on Muslims to "declare jihad against the infidels and their agent helpers, not only on the ground, but in the sea and air as well," noting the presence of foreign warships in the Gulf of Aden, the Arabian Sea and the Red Sea.
"As they declared it to be an open war on the people of Islam, we must declare an open war against the Crusaders and their traitor helpers," Al-Qaeda said.
Yemen is under US pressure to clamp down on Al-Qaeda, and analysts say the government in the impoverished state is keen to show the world it can crush the militants on its own.
Late last year it launched a new offensive against AQAP and claimed to have killed more than 60 militants in two separate air strikes in December.
Yemen on Saturday also announced the arrest of another three suspected Al-Qaeda members near the border with Saudi Arabia. That followed the capture earlier this month of three militants believed to be behind threats against Western interests in Sanaa that caused embassies to close for several days.
The government in Sanaa "wants to avoid a foreign military intervention targeting Al-Qaeda," said Adel al-Ahmadi, a Yemeni specialist on the group.
"Yemen is trying to say that it can accomplish the mission on its own, and just needs logistical assistance... and political support to consolidate its regime in the face of local adversaries."

#Yemen vows to counter Qaeda threat
You May Also like: