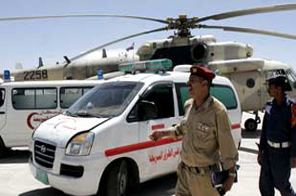 Ambulances wait for the arrival of the bodies of three women aid workers being flown in on a military helicopter to the Yeman capital San'a on Wednesday Source:

SAN'A: Hundreds of Yemenis rallied in a northern city on Wednesday, demanding the government find and arrest the kidnappers of nine foreigners who went missing while picnicking in a remote area a week ago.
Three of the kidnapped - two German nurses and a South Korean woman - have since been found dead. Six others, including a German doctor, his wife and their three young children, remain missing.
The abduction was the latest attack on foreigners in this impoverished Arab nation on the tip of the Arabian peninsula, where al-Qaida has a firm foothold in remote areas.
Yemeni authorities said the nine foreigners disappeared Friday in the northern province of Saada. A Dutch aid organization, World Wide Services Foundation, helping with medical care in the province, said the missing group belonged to its team working in a Saada hospital.
The Yemenis said shepherds found the mutilated bodies of the three women on Monday.
A Yemeni security official said the bodies, which were brought to the capital, San'a, on Tuesday, had gunshot wounds to the head, execution-like style. He spoke on condition of anonymity because he wasn't authorized to speak to the media.
He also said police detained three guards at the Saada hospital over suspicion they may have given the kidnappers information about the foreigners that facilitated the abduction.
A local official said the rest of the foreign crew at the hospital in Saada has been evacuated to the capital. He also spoke on condition of anonymity for the same reason as the security official.
German Foreign Ministry spokesman Jens Ploetner told reporters in Berlin on Wednesday that the body of one of the missing German women had been identified but that tests had not been carried out to formally identify the other.
Ploetner offered no new information on the missing, and stressed that a German crisis team was working to clarify their fate.
"At this time we have to assume that the five Germans and other western citizen are in the hands of violent criminals," Ploetner said. "Through various channels we are very intensively seeking clarification." He noted that Germany in March issued a travel warning for the region where the group went missing, adding that its remoteness coupled with the lack of infrastructure there were making search capabilities very difficult.
Meanwhile, helicopters joined the search for hostages in Saada, while hundreds marched in the province's Saada city in a government-orchestrated protest against the abduction.
About 3,000 members of a Shiite rebel group also rallied in the city to denounce the kidnappings. Authorities had initially accused the group - led by separatist leader Abdel-Malek al-Hawthi - of the kidnapping, but the rebels denied involvement and said they launched their own investigation into the abduction.
Later, officials and tribal leaders blamed al-Qaida for the abduction but the terror network has made no claim so far.
Yemani President Ali Abdullah Saleh offered a $250,000 reward for information on the whereabouts of the kidnappers or the hostages.
In the past, tribesmen have kidnapped foreigners to wrest concessions on local issues from the government - including ransoms, the release of jailed relatives or even promises to build local infrastructure.
But they usually treated hostages well and released them unharmed. Past abductions by al-Qaida, however, have ended with hostages' deaths.

#Yemenis denounce killing of hostages
You May Also like: