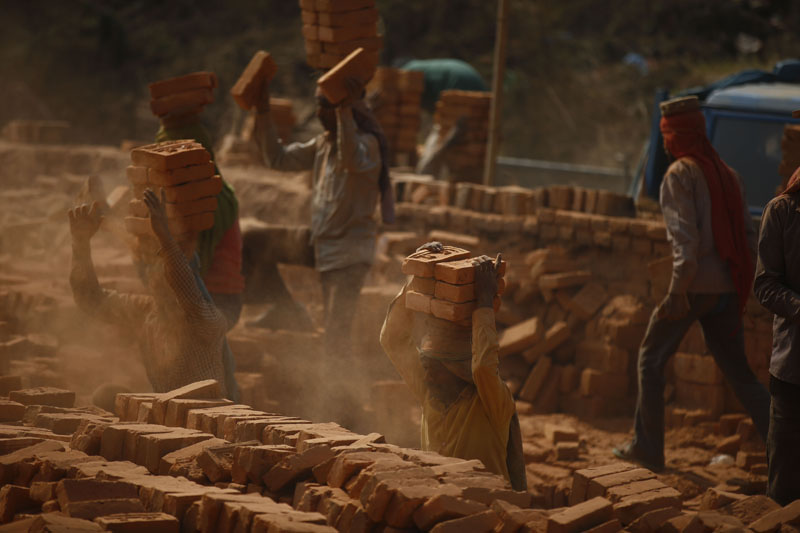 File - Migrant workers stacks bricks onto their heads at a brick kiln in Sipadol, Bhaktapur on Wednesday, February 3, 2016. Photo: Skanda Gautam
Kathmandu, December 30 Brick kilns in the Kathmandu Valley have adopted zig-zag system in brick production to reduce brick kiln emissions. Former industry minister Mahesh Basnet had released ‘Design Manual for Improved Fixed Chimney Zig-Zag Brick Kilns’ in October last year and entrepreneurs have been constructing their kilns under this model, especially following the earthquake in 2015. Such model for brick kiln construction was developed by the International Centre for Integrated Mountain Development (ICIMOD) and the model follows zig-zag pattern of brick baking to reduce emission of suspended particular material (SPM) into the atmosphere. Under this model, bricks are laid in a zig-zag system while baking and single-man-coal-feeding system is applied when bricks are baked. This system of baking bricks is believed to increase air flow inside brick chimneys that ensures effective and uniform burning of coal, which ultimately helps to reduce black carbon emission from brick chimneys. “Almost all 100 brick kilns operating in the Valley have reconstructed their chimneys as per the new model,” said Mahindra Bahadur Chitrakar, president of the Federation of Nepal Brick Industries, adding that zig-zag methodology has proved not only to be environment-friendly and energy-efficient but also resulted in enhancing structural safety of chimneys. As per Chitrakar, brick kilns outside the Valley are also slowly adopting the new model of chimney construction and production through zig-zag technology. “The new model has become more popular among brick kilns after the earthquake of last year, which damaged almost 350 brick kilns across the country.” According to the federation, there are around 950 brick kilns across the country. Operators of brick kilns also concur that adoption of new model of baking bricks in zig-zag system has significantly reduced emission of SPM into the atmosphere. “As per the regulation, brick kilns cannot emit more than 700 mg/NM3 SPM. However, the SPM emission dropped to as low as 113 mg/Nm3 after the brick kilns were reconstructed under new model and bricks were baked under zig-zag system,” said Raj Kumar Lakhemaru, owner of Swet Bhairab Fixed IttaUdhyog in Bhaktapur, adding that this has also reduced health-risks of labourers working inside the brick kilns. “Smoke gets bent and filtered at numerous points inside the chimneys while bricks are baked using the zig-zag method. As a result, low carbon is emitted from the chimneys,” said Lakhemaru. All 63 brick kilns in Bhaktapur have followed this method after realising the benefits.
#Kathmandu Valley #ICIMOD #Integrated Mountain Development #brick kilns #zig-zag technology #suspended particular material #SPM
You May Also like: