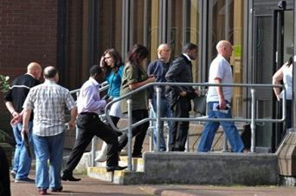 The British unemployment rate jumped to 7.9% in the three months to July Source: AFP

LONDON: Britain's recession-hit economy took another beating on Wednesday as official data showed that the labour market was in its worst state for 14 years, with companies slashing jobs to save cash.
The number of unemployed climbed by 210,000 to 2.47 million people in the three months to July -- the highest level since May 1995 -- despite tentative signs of economic recovery.

And the unemployment rate rose to 7.9 percent in the three months to July, hitting the highest level since November 1996, according to data released by the Office for National Statistics (ONS).

News of worsening labour market data comes despite growing expectations that Britain could soon follow France, Germany and Japan out of a deep recession that was sparked by the global financial crisis.

"Even if the recession is over, it will continue to feel like one for many people for a long time yet."

However, other analysts sought solace from the fact that the pace of losses was receding.

"The latest round of UK labour market numbers continued to point to a weak labour market. Albeit one that, at the margin, is getting less weak," said Credit Suisse economist Neville Hill.

"The overall impression that emerges is that the worst of the job cuts are probably over, but unemployment is still likely to rise markedly further."

He added: "Unemployment jumped by 210,000 in the three months to July, thereby taking the number of jobless up to a 14-year high of 2.470 million and the unemployment rate up to a near 13-year high of 7.9 percent.

Bank of England Governor Mervyn King had said Tuesday that there were "signs" of a British economic recovery in the third quarter, following a prolonged recession.

"Following a precipitate fall in economic activity at the end of last year and the start of this, there are now signs that growth has resumed in the third quarter," King told lawmakers.

However, he also warned that the effects of the international financial crisis would likely be "pervasive and long-lasting".

Gross domestic product contracted 0.7 percent in the second quarter of 2009 compared with the first three months of the year, in the fifth quarterly drop in a row. That was a modest improvement on the previous estimate of a 0.8-percent contraction.

On Tuesday, British defence equipment firm BAE Systems announced that it planned to axe 1,116 jobs in Britain and close a key facility in northwestern England in response to falling orders.

#British unemployment hits 14-year high
You May Also like: