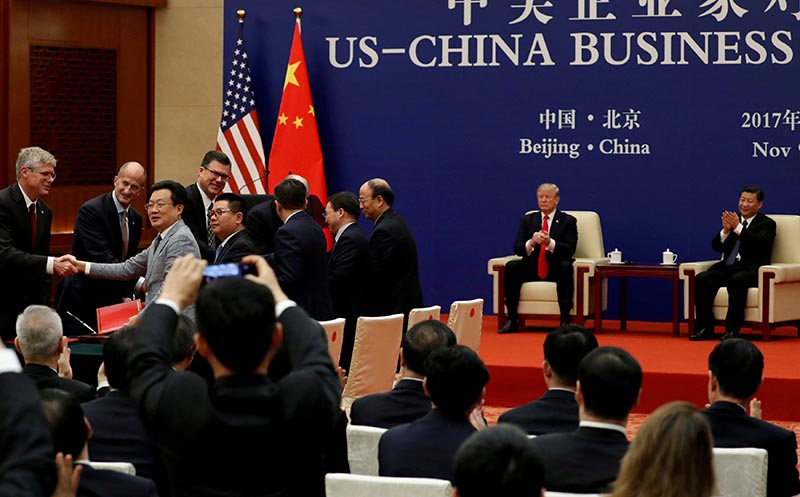 China's President Xi Jinping and US President Donald Trump witness US and Chinese business leaders signing trade deals at the Great Hall of the People in Beijing, China, on November 9, 2017. Photo: Reuters/ File
BEIJING: China accused the United States of "repeatedly abusing" trade practices, as Beijing braced on Thursday for an imminent announcement from US President Donald Trump slapping more tariffs on Chinese imports. The US tariffs on Chinese imports worth as much as up to $60 billion are set to be unveiled later on Thursday, raising fears that the world's two largest economies could be sliding towards a trade war. On Wednesday, the World Trade Organization ruled that Washington had not fully complied with a 2014 ruling against its anti-subsidy tariffs on various Chinese products ranging from solar panels and wind towers to steel cylinders and aluminium extrusions. The WTO ruling "proves that the US side has violated WTO rules, repeatedly abused trade remedy measures, which has seriously damaged the fair and just nature of the international trade environment, and weakened the stability of the multilateral trading system," China's commerce ministry said late on Wednesday. The tariffs Trump is set to announce will be imposed under Section 301 of the 1974 US Trade Act, following an intellectual property probe launched in August last year. Trump is accusing Beijing of compelling US firms to transfer their intellectual property (IP) to China as a cost of doing business there. Trade wars are "good" and "easy to win", said Trump, having made election campaign promises to get tough with China over its huge surplus with the United States. China has repeatedly said it has no wish to fight a trade war, but warned that it is ready if needed. "With regards to the Section 301 investigation, China has expressed its position on many occasions that we resolutely oppose this type of unilateral and protectionist action by the US," the Commerce Ministry said in a fresh statement on Thursday. "China will not sit idly by while legitimate rights and interests are hurt. We must take all necessary measures to firmly defend our rights and interests." The Wall Street Journal reported that Beijing has already prepared to strike back with tariffs aimed at Trump's support base, including levies targeting US agricultural exports. "FOR TARIFFS SAKE" US Trade Representative Robert Lighthizer said on Wednesday the tariffs would target China's high-technology sector and there could also be restrictions on Chinese investments in the United States. Other sectors like apparel could also be hit. Jacob Parker, Beijing-based vice president of China operations at the US-China Business Council said the group wanted to know what action the US administration wants China to take to improve protection for intellectual property, and over forced technology transfer. "It's really important for them to lay that out so that we have a strategy going forward and it's not just tariffs for tariffs' sake." Parker said China needs to adopt a tougher deterrent against counterfeiting and IP theft, and do away with joint venture and business licensing requirements that can be used to mandate technology transfers to gain market access. "At the moment, it's very difficult for the two sides to sit down and talk because the Trump administration seems determined to go this way regardless of China's manoeuvres," said He Weiwen, a senior fellow at the Center for China and Globalization (CCG), a Beijing-based think tank. LIMITED IMPACT The measures planned by Washington so far are expected to have a limited impact on China's economy, which is far less dependent on exports than it was a decade ago. "Most Chinese corporates seems to be quite resilient against a potential trade war given the high share of domestic revenue," said Alicia Garcia Herrero, chief economist for Asia Pacific at Natixis. "However, there are certain sectors which will be relatively more affected, such as information technology and consumer durables." In a possible sign of what is to come, Best Buy Co Inc , the largest US consumer electronics retailer, has decided to stop buying smartphones from Chinese telecom equipment maker Huawei, a source familiar with the matter told Reuters. Moody's Investors Service said the impact would be far greater if the United States significantly expands tariffs and throws in broad-ranging protectionist measures. Sectors with a large, direct exposure to the US market, Moody's said, included cork and wood products, furniture, office machines, household appliances, electrical equipment, road vehicles, telecommunications equipment, electrical machinery, apparel and footwear, animal oils and fats. Analysts said US companies like Boeing Co, which sell billions of dollars worth of planes to Chinese airlines, as well as deals which require Chinese approval could also become caught in the cross fire should a trade war break out. Boeing this week announced a $3.6 billion order from China Southern Airlines Co Ltd's subsidiary Xiamen Airlines. Chip giant Qualcomm Inc is still waiting for Chinese approval of its proposed $44 billion acquisition of NXP Semiconductors NV. US electric carmaker Tesla Inc is in long-running talks with Shanghai authorities to build a local manufacturing plant in the city, while Chinese state media have called for measures against US soybean imports to China.
#United States #China #Chinese imports #World Trade Organisation #WTO #US Trade Act #US tariffs
You May Also like: