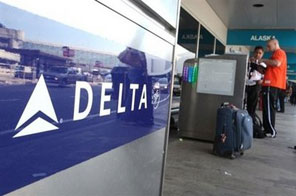 The logo of Delta Airlines seen at San Francisco International Airport. The airline and its SkyTeam alliance partners have offered Japan Airlines a billion-dollar financial lifeline, as Tokyo refused to rule out allowing the carrier going bankrupt. Source: AFP

TOKYO: Japan Airlines was offered a billion-dollar financial lifeline on Wednesday from Delta Air Lines and its SkyTeam alliance partners, as Tokyo refused to rule out allowing the carrier going bankrupt.

The US carrier is seeking to lure JAL away from the rival Oneworld airline grouping and American Airlines, which is also seeking a tie-up with JAL, eyeing its lucrative Asian landing slots.

JAL president Haruka Nishimatsu said last week the company aimed to conclude an alliance agreement with a foreign carrier by the end of the year.

He said it "seems natural" to maintain ties with American Airlines, which has said it might team up with US private equity firm TPG to invest in JAL.

Delta's announcement came as shares in JAL plunged to an all-time low after the Japanese government said that bankruptcy was still a possibility for the airline, which lost 1.5 billion dollars in the six months to September.

"I have never said the government would not allow bankruptcy protection" for JAL, Transport Minister Seiji Maehara told a parliamentary panel.

Rather, the government wanted to ensure it did not "collapse and disappear," he said.

JAL, Asia's largest carrier, is seeking an injection of public funds to boost its capital as it restructures under the supervision of a government-backed turnaround body.

It is also set to receive an emergency loan from a state-backed lender.

The airline last week reported a massive net loss of 131.2 billion yen (1.5 billion dollars) for the fiscal first half to September, scrapping its forecasts for the rest of the year due to the uncertain outlook.

The global economic downturn has dealt a heavy blow to JAL's efforts to recover from a long period of financial turbulence stretching back to its privatisation more than two decades ago.

The airline, the recipient of three government bailouts since 2001, has said it plans thousands of job cuts and a drastic reduction in routes, although its restructuring plan has not yet been finalised.

The transport minister's remark sent JAL's share price down to an all-time low of 94 yen in morning trade. The stock closed down 3.9 percent at 98 yen.

#Delta offers JAL $1 bln financial lifeline
You May Also like: