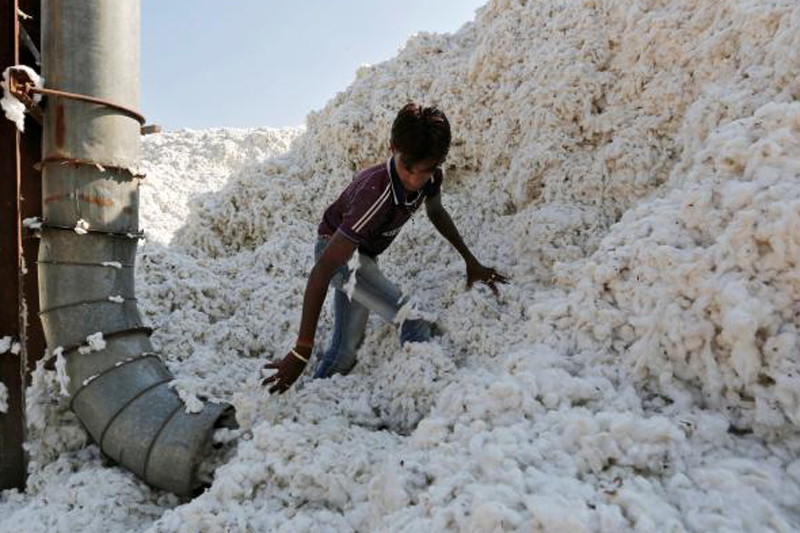 A worker fills a vacuum pipe with cotton to clean it at a cotton processing unit in Kadi town in the western state of Gujarat, India, February 9, 2015. Photo: Reuters
NEW DELHI: Indian cotton exporters have cancelled orders for around 25,000 bales and postponed shipments of about 200,000 bales by up to a month after a supply shortage pushed up local prices, industry officials told Reuters. The move by the world's biggest cotton producer is likely to help rival suppliers like Brazil, the United States and some African countries boost exports, with some India textile mills even starting to import cheaper fibre from overseas. "Exporters had signed contracts at around 75 cents (per lb) in December and January. Now (local) prices have shot up to 84 cents. They could not fulfil the orders," said an exporter based in Mumbai, adding that contracts to export nearly 25,000 bales to Pakistan and Bangladesh have been cancelled. Raw cotton supplies usually peak in India between December and February, pushing down prices. This year, local prices MCOTc2 have jumped more than 10 percent over the past two months, with farmers now delaying cotton sales in expectation of further price rises. "Limited supplies in spot markets forced some exporters to delay shipments. They are delaying shipments by 15 days to one month," said Chirag Patel, chief executive of Indian exporter Jaydeep Cotton Fibers. Prices have been hiked by the fallout government's move to scrap high-value currency notes, which disrupted trading in the cash-oriented market. Traders estimate farmers sold 15.5 million bales of cotton between October and January, down nearly 19 percent from last year's 19.11 million bales. "Right now Indian cotton is not competitive. Export demand is not much," said Patel. India has exported around 2.5 million bales so far in the 2016/17 season that started on Oct. 1. In 2015/16 India exported 6.9 million bales, but this year exports could fall 28 percent to 5 million bales, said a senior official with Khimji Visram & Sons (KVS), a Mumbai-based exporter. "Exports will pick up only if Indian prices come in line with international prices. If we are not competitive, exports will be limited. It could be even less than 5 million bales," the official said. Pakistan, Bangladesh, China and Vietnam are key buyers of Indian cotton. Traders said farmers were likely to release stocks if local raw cotton prices rise another 5 percent, taking them above 6,000 rupees per 100 kg, but the delay could see local exporters miss out to rivals. At the same time, traders are scaling down production estimates, after the government initially expected good monsoon rains would boost the country's output in 2016/17 by 3.8 percent from a year ago to 35.1 million bales. "Production could be around 33 million bales. The crop is lower in Gujarat than what we thought," said Dharmesh Lakhani, a ginner based at Rajkot in western state of Gujarat. The rally in local prices has prompted some Indian textile mills to start imports. "Textile mills in southern India have contracted cotton for shipments in March and April. For them, imported cotton is nearly 2 cents (per lb) cheaper than local supplies," said a New Delhi based dealer with a global trading firm.
#United States #India #China #Brazil #cotton
You May Also like: