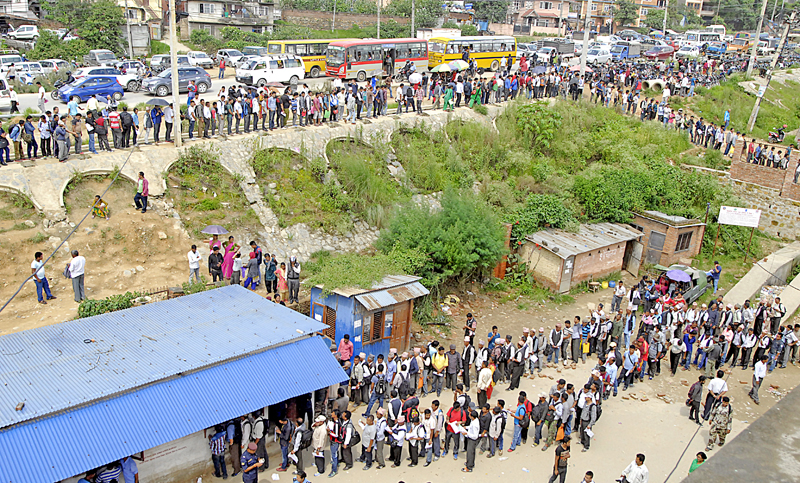 Families of earthquake victims queuing at the office of the Department of Transport Management to submit registration forms permitting them to import cars and start cab service, in Ekantakuna, Lalitpur, on Wednesday, August 10, 2016. Photo: THT
Kathmandu, May 25 The government’s plan to issue permits to earthquake victims to operate taxis has once again been delayed until the fourth week of June due to the ongoing local level election. Officials of the Department of Transport Management (DoTM) have said that new taxi permits will now be issued through a lucky draw on June 23, 24 and 25. In a bid to generate livelihood opportunities for quake survivors of major earthquake-affected districts, the government last year had decided to issue 1,500 new taxi permits. However, DoTM could not immediately award taxi licences to quake survivors as it received more than 149,000 applications. As a result, DoTM had planned to award taxi licences through lottery earlier in April. But the department had to postpone the lottery programme to May 27 due to the election. And yet again, DoTM has put off its plan to distribute new taxi permits to quake victims to the fourth week of June due to the second phase of local election, which is scheduled for June 14. “We will complete the distribution process of new taxi permits in the fourth week of June,” said Tok Raj Pandey, spokesperson for DoTM, adding that new taxi permits will be distributed through a lottery in three phases. As per DoTM, the lottery draw programme will be broadcast live on television. Moreover, applicants had filed an application at the DoTM office in April urging it to hold the lucky draw programme at the earliest. While the government had intended to give new taxi permits only to quake survivors of 14 major earthquake-affected districts, 25,000 applications for taxi permits had come from quake survivors of Sindhupalchowk district alone. The government had issued new taxi permits for the first time in 15 years in 2015 following immense demand from people. Though the government had planned to issue new taxi permits in Kathmandu Valley earlier, Valley cab operators had raised a voice against new permits. As per DoTM, there are almost 8,000 taxis plying on the Valley’s roads at present. “It is necessary to issue new permits to taxis to ease public transportation in the Valley,” said Pandey. Meanwhile, Nepal Bureau of Standards and Metrology (NBSM) has started installing computer billing system in taxis operating in Valley to ensure that cab operators do not cheat commuters. As per NBSM officials, more than 5,000 taxis in Valley have already fitted computer billing system in their cabs.
#Department of Transport Management #DoTM #Taxi lottery #Government taxi lottery #Earthquake victims taxi
You May Also like: