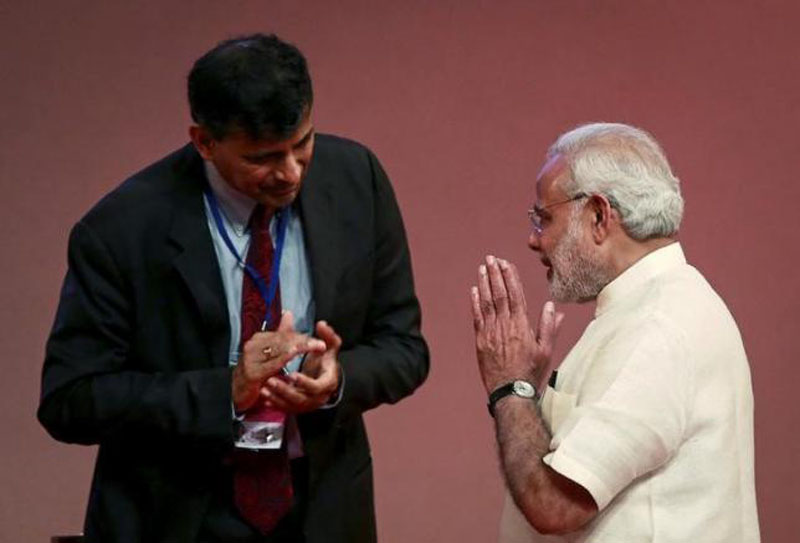 FILE - India's Prime Minister Narendra Modi gestures to Reserve Bank of India (RBI) Governor Raghuram Rajan at an event on financial inclusion in Mumbai on April 2, 2015. Photo: Reuters
NEW DELHI/MUMBAI: Rupee slipped to its weakest in nearly a month, while stocks fell and bond yields rose after central bank governor Raghuram Rajan's surprise announcement over the weekend that he would quit after his term ends in September. The central bank was spotted selling dollars to curb the fall in the local currency, three traders said. The rupee was trading at 67.47 to the dollar at 0404 GMT, after hitting 67.70 to the dollar, its weakest since May 24. The currency had closed at 67.08/67.09 to the dollar on Friday. Rajan's unexpected decision comes at a time when investors had been bracing for heavy volatility from global markets as Britain is due to vote on Thursday on whether to leave the European Union. Though analysts had speculated Rajan could decide not to pursue a second term after a major regional newspaper reported last month he did not want to remain at the central bank, few had foreseen an announcement would come in the form of a letter to staff. The focus will now shift to Rajan's successor and analysts said they did not expect any long-term impact to markets as long as his replacement is seen as credible and somebody who can defend the central bank's autonomy at a critical juncture in its history. "If you were to see someone come in who has very different set of policies, then the market will question if something has changed. That would not be my base case. If that were to happen, that would make me reassess how we thought about India," said Josh Crabb, head of Asian equities at Old Mutual Global Investors in Hong Kong with $37.3 billion under management. "If the system shows a willingness, a continuation of those policies, irrespective of the individual involved, that’s quite a large vote of confidence." Rajan, a former International Monetary Fund chief economist, has been popular with foreign investors for his efforts to tackle inflation and helping to rescue India from its worst crisis in more than two decades when he took the helm in 2013. The benchmark 10-year bond yield was up 3 basis points to 7.53 percent. The one-year OIS rate was bid at 6.71-6.73 percent while the five-year OIS rate was bid at 6.84 percent, traders said. The one-year swap closed at 6.68 percent and five-year at 6.77 percent on Friday. The Nifty was flat after falling as much as 0.77 percent.
#European Union #rupee #Indian market #RBI Rajan #Indian central bank governor Raghuram Rajan
You May Also like: