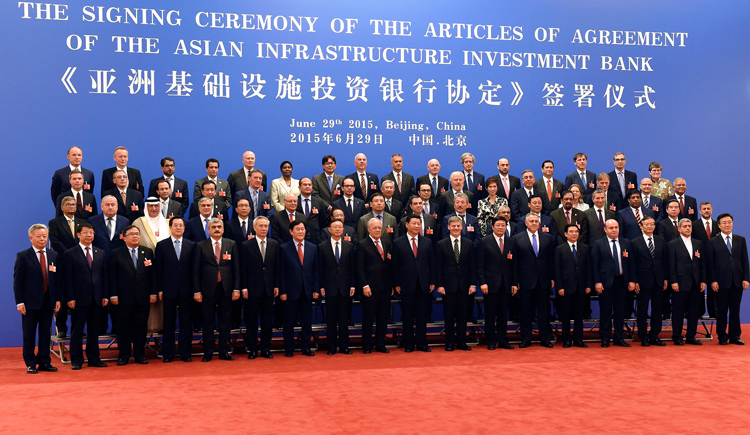 Delegated from 50 countries, including Nepal's Finance Minister Ram Sharan Mahat (fifth from right, second row), posing for a picture at the signing ceremony of the Articles of Agreement of Asian Infrastructure Investment Bank, in Beijing, on Monday.
KATHMANDU, June 29 Nepal has acquired 809 units of shares, 0.081 per cent stake, in the Asian Infrastructure Investment Bank (AIIB) to become the founding member of the new China-led multilateral development bank. The value of each of these shares is worth $100,000, meaning the country acquired shares worth $80.9 million in the bank, shows the AIIB’s charter posted on the website of China’s Ministry of Finance. Nepal, however, does not have to pay the entire amount up front, as AIIB has divided authorised capital stock into paid-in shares and callable shares. The bank has authorised capital stock of $100 billion. Of this, $20 billion has been identified as paid-in shares — which have to be paid in instalments of five to 10 years, depending on economic condition of countries — and the rest, $80 billion, has been classified as callable shares, which have to be paid in during extraordinary circumstances whenever AIIB members make a call. This means Nepal will have to make capital subscription of $16.18 million (approximately Rs 1.62 billion) to become founding member of the bank. In Nepal’s case, this amount can be paid in over 10 years because the AIIB’s charter says: “A member considered as a less developed country may pay its subscription entirely in dollars or other convertible currency in up to 10 instalments.” Other member countries have to make the payments in five instalments of 20 per cent each every year, adds the charter, which is officially known as the Articles of Agreement (AoA). Finance Minister Ram Sharan Mahat today put the initials on the AoA at the Great Hall of the People in Beijing in presence of Chinese President Xi Jinping. Nepal was one of the 50 countries to sign on AIIB’s charter today. Additional seven countries are still waiting for domestic approval before they formally sign the AoA, says the UK-based Financial Times (FT). “This AoA, deposited with the government of China, shall remain open until December 31, 2015, for signature by the governments of (founding members) countries,” says the AIIB’s charter. Also, the AoA would be subject to ratification, acceptance or approval by signatories — meaning either the Parliament or Cabinet should approve it. “Instruments of ratification, acceptance or approval (should) be deposited with the Chinese government not later than December 31, 2016, or if necessary, until such later date as may be decided by the Board of Governors by a special majority vote,” adds the charter. Although it is widely said the AIIB would come into operation by end of 2015, the charter says ‘the bank shall notify its members of the date of commencement of its operations’. Once the AIIB comes into operation, Nepal will get access to another multilateral lending institution to acquire concessional loans to finance development projects. The idea of opening the AIIB was first floated by Chinese President Xi and Prime Minister Li Keqiang during their visits to Southeast Asian countries in October 2013. Following these announcements, bilateral and multilateral discussions and consultations were held on core principles and key elements of the AIIB. Then in October 2014, various countries, including Nepal, signed the memorandum of understanding to become founding member of the bank. Since then, representatives of these countries, which have expressed interest to become founding member of the AIIB, have held five rounds of meetings in Kunming (China), Mumbai (India), Kazakhstan, Beijing (China) and Singapore. These chief negotiators’ meetings were held to finalise the content of the AoA of the AIIB. China will have ‘veto power’ in the AIIB, as per Bloomberg. “With 26.06 per cent of voting rights in Beijing-based lender, China would be able to block major decisions as the bank requires a supermajority of 75 per cent to take important decisions,” FT and Bloomberg said.
#Ministry of Finance #Finance Minister Ram Sharan Mahat #Asian Infrastructure Investment Bank (AIIB) #Articles of Agreement (AoA) #Chinese President Xi Jinping #Board of Governors #Southeast Asian countries
You May Also like: