Treasury said to be unprepared on AIG bonus plans 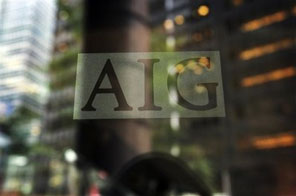 FILE - In this Sept. 16, 2008 file photo, The American International Group logo is shown in New York. The Obama administration's pay czar has asked American International Group to withhold some of the millions in bonuses promised to its employees. Kenneth Feinberg, the special master for executive compensation, 'has informally advised AIG not to pay the full 8 million' employees expect to receive, according to a report Tuesday Oct. 13, 2009 from the special inspector general overseeing the 0 billion financial bailout. Source: AFP

WASHINGTON: The pitched drama over bonuses for bailed-out executives will be revived on Capitol Hill Wednesday as a government watchdog explains how some executives nearly brought down the financial system then pocketed millions.
Neil Barofsky, the special inspector general for the $700 billion financial rescue program, will answer questions about a new report outlining the official missteps that led to massive bonus payments for executives at insurer American International Group Inc.
In a report released Tuesday, Barofsky wrote that the Treasury Department did not understand AIG's byzantine pay structures when it gave the firm billions in aid last fall. The government has committed a total of more than $180 billion to wind down the New York-based insurance and financial services conglomerate, and now owns about 80 percent of the company.
AIG's bonuses sparked a political firestorm earlier this year when it was revealed that the government could not legally stop AIG from paying millions in bonuses even after taking billions in bailout money.
Barofsky's appearance is expected to recall testimony in March by Treasury Secretary Timothy Geithner, who was president of the Federal Reserve Bank of New York when AIG first was bailed out. The Federal Reserve provided AIG's first lifeline.
Geithner said at the time he had not known about nearly $1.75 billion in bonuses, retention payments and deferred compensation that AIG was contractually obligated to pay its workers. Millions went to employees in the unit whose bets helped sink the company.
Barofsky found no evidence that Geithner knew about the payments before March. But he wrote that it was a "failure of communication" for the top executive of the agencies overseeing AIG to be unaware of the payments.
AIG has asked employees to return some of the money voluntarily.
The report also said the Obama administration's pay czar has asked American International Group to withhold some of the millions in bonuses promised to its employees. Kenneth Feinberg, the special master for executive compensation, "has informally advised AIG not to pay the full $198 million" employees expect to receive, the report said.
Feinberg is locked in negotiations with the seven companies that received the most expensive taxpayer bailouts. AIG's was by far the largest. To secure its bailouts, AIG argued to Treasury that its failure would doom the broader financial system.
It took officials from the Federal Reserve Bank of New York months to untangle AIG's "staggeringly complex, decentralized" compensation structure, the report says. They eventually discovered 620 bonus programs totaling $455 million, and 13 retention plans allocating $1 billion.
The company is talking to Feinberg about matters "including future payments to employees of AIG Financial Products," spokeswoman Christina Pretto said in a statement. Employees have until the end of the year to return voluntarily some of the bonus pay they received in March, she added.
Barofsky's report recommends that Treasury work closely with officials from the New York Fed, which is funding parts of the AIG bailout. It also suggests Treasury improve oversight of companies that it owns, including reviewing compensation programs before buying major ownership stakes in companies.
In a written response, Herbert M. Allison Jr., Treasury's assistant secretary in charge of the government bailout, said the department is implementing the guidelines and "has no present intention" of buying another financial company.
"We welcome your comments and suggestions as Treasury continues to strengthen oversight of financial institutions" receiving government assistance, Allison wrote.

#Treasury said to be unprepared on AIG bonus plans
You May Also like: