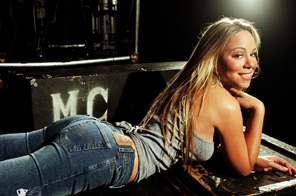 LONDON: Pop singer Mariah Carey is set to put her acting skills to the test - she is reportedly in negotiations to take on a starring role on the London stage.
The Hero hitmaker launched her acting career with a lead role in 2001's Glitter, which was mauled by the critics and landed Carey a Golden Raspberry award for Worst Actress.
She subsequently landed a string of less high profile roles, including an appearance in independent film Tennessee which received a limited release this month. Carey will next be seen in upcoming movie Push: Based on the Novel by Sapphire.
But Carey is determined to prove herself as a serious actress and is now said to be in talks to make her stage debut in London next spring (10).
A source tells British newspaper the Daily Mirror, "Mariah's done a bit of acting in her time, but nothing on this scale. She was hugely flattered to have been asked and is determined to nail the part. She is pretty confident in her own abilities. And although there has been talk of musicals, Mariah has always wanted to star in a play so this really is a dream come true."