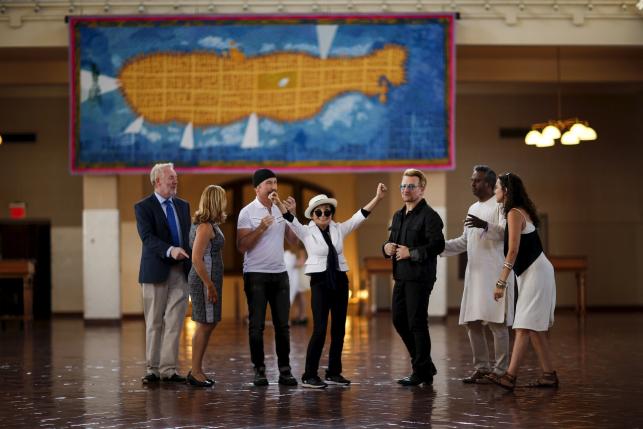 Artist Yoko Ono (C), widow of John Lennon, reacts next to Irish singer Bono (3rd R) and guitarist The Edge of U2 (3rd L) during the unveiling of a tapestry honoring Lennon at Ellis Island in New York July 29, 2015. REUTERS
NEW YORK: Nearly 40 years after he obtained his green card, John Lennon has been honoured in New York with a tapestry showing Manhattan as a yellow submarine and the late Beatle holding up a peace sign at the helm. Lennon's widow Yoko Ono and U2 rockers Bono and The Edge helped unveil the artwork at the Ellis Island National Museum of Immigration on July 29, proclaimed "John Lennon Day" by the New York City mayor's office. "John knew how urgent (peace) was," Ono said at the event. "But also he knew that what we believe in becomes reality." Art for Amnesty founder Bill Shipsey commissioned the tapestry as a thank you to Ono for giving Amnesty International the rights to record cover versions of Lennon's post-Beatles songs, helping raise money for the rights group. "For many years, Ellis Island has stood as a symbol of the United States' compassion to those who came to its shores," Amnesty International Secretary General said in a press release. "It is our hope that this beautiful tapestry ...will serve as a reminder to extend John Lennon's message of peace and love to all of those who leave their homes in search of a better life." Born in the British city of Liverpool, Lennon came to the United States in the early 1970s. The singer and peace activist, vocal in his criticism of the Vietnam War, faced deportation proceedings before eventually getting U.S. residency in July 1976. Just over four years later he was shot at the entrance to his New York apartment block, dying of his injuries within minutes.
#John Lennon #New York #yellow submarine
You May Also like: