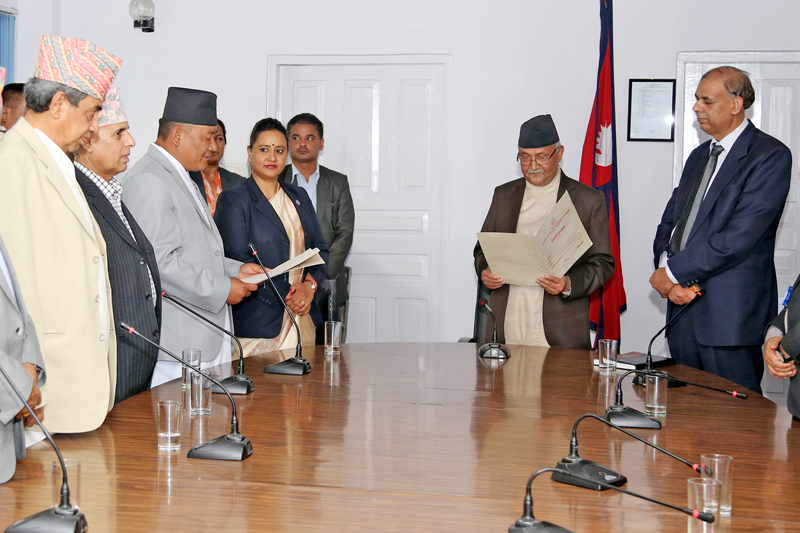 Prime Minister KP Sharma Oli administers the oath of office and secrecy to the newly appointed Assistant Minister for Federal Affairs and Local Development, Resham Lama, at Singha Durbar on Wednesday, April 27, 2016. Photo: RSS
KATHMANDU: Prime Minister KP Sharma Oli on Wednesday relieved Assistant Minister for Federal Affairs and Local Development Biraj Bista of his duty. Oli also appointed Resham Lama in Bista's post. The decision comes after their party Rastriya Prajatantra Party-Nepal , led by Deputy Prime Minister Kamal Thapa, recommended the Prime Minister to do so last week. READ ALSO: Lama was administered the oath of office and secrecy today itself. Thapa himself leads the Ministry as the Minister while another RPP-N leader Kunti Kumar Shah has been working as the State Minister at MoFALD above the assistant minister. The RPP-Nepal had decided to call back Bista from the government alleging him of carrying out activities against the party's norms and values. The party had also recently removed Bista’s father, Keshar Bahadur Bista, from the responsibility of co-chairmanship after he made a public statement that the party should leave the government as the government could not address agendas raised by the party. (With inputs from the Rastriya Samachar Samiti)
#Rastriya Prajatantra Party-Nepal #PM KP Sharma Oli #Biraj Bista #Resham Lama
You May Also like: