Nepal's Capital 7th most polluted city in the world

KATHMANDU: Nepal's capital Kathmandu has been dubbed as the seventh most polluted city in the world, thanks to rampant air and water pollution.

Numbeo recently made public the pollution ranking of 290 cities around the world.

Numbeo said it included relevant data from World Health Organisation and other institutions for the ranking.

The cities were listed on the basis of air pollution and then the water pollution/accessibility followed by other pollution types. 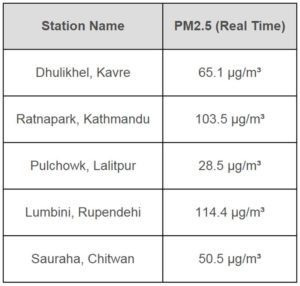 According to the Department of Environment of Nepal, the particulate matter (PM 2.5) of Ratnapark is 103.5 µg/m³ marking Kathmandu as one of the unhealthy cities to live in.

PM 2.5 indicates the matter present in the air that are 2.5 microns or below. These particles include dust, coal particles exited from power plants and home heating, car exhaust, and pollen from plants among others.

Under the DoE, there are three monitoring stations that record the air quality around the clock. They are stationed in Ratnapark, Pulchok and Dulikhel.