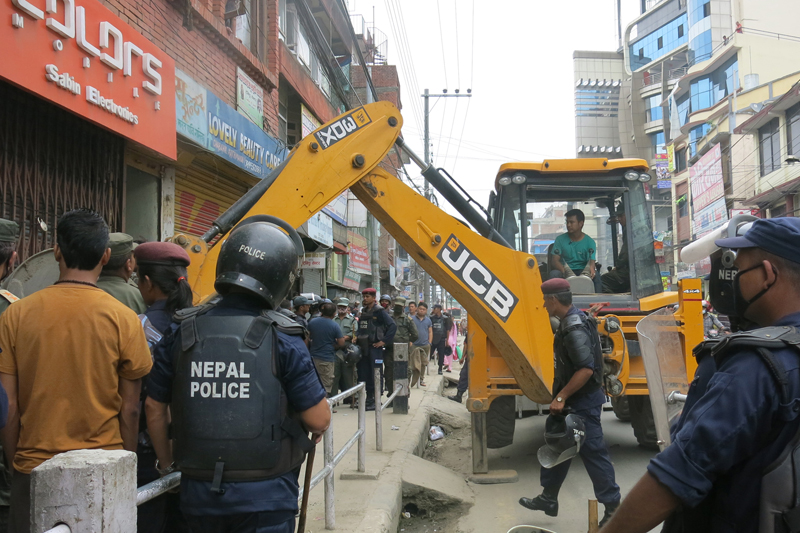 An excavator is mobilised to demolish structures by the road as Chabahil-Sankhu road expansion begins, in Chabahil of Kathmandu, on Saturday, June 3, 2016. Photo: RSS
Kathmandu, December 4 The government has begun expansion of various parts of the Tripureshwor-Kalanki stretch in the Valley. The Kathmandu Valley Development Authority has employed excavators and bulldozers to begin demolishing marked buildings and clearing the sites. About two weeks ago, the KVDA had decided to use force after locals continued to obstruct expansion work along Teku-Soltimode and Jorpati-Sankhu stretches. “We have begun work at places where locals had not allowed us to even mark buildings earlier,” said KVDA Development Commissioner Bhaikaji Tiwari, adding, “We are under intense political and local pressure, but we began work last week with the help of security forces.” He said expansion work had begun along the Teku-Soltimode stretch. According to the Central Regional Road Directorate of the Department of Roads, they have begun clearing the Tripureshwor-Kalanki stretch, and the directorate is all set to relocate electricity lines along the Kalanki-Naagdhunga stretch as soon as possible. “However, there has been no progress on work along the Jorpati-Sankhu stretch,” Regional Director of the directorate Ayodhya Prasad Shrestha told The Himalayan Times. According to the directorate, expansion work of both sections — Kalanki-Nagdhunga and Sakhu-Jorpati — have to be completed by July 15, 2017. However, only 20 to 25 per cent of work on the Tripureshwor-Nagdhunga stretch, and only 15 to 20 per cent work on the Chabahil-Jorpati-Sakhu section has been completed so far. The Kathmandu Valley Road Improvement Project had resumed the project to expand 53 km of road segments in Kathmandu in July this year. The project had started expansion work along Tripureshwor-Kalanki, Chabahil-Jorpati-Sankhu, Jorpati-Sundarijal, Lagankhel-Satdobato, Imadol-Siddhipur-Godawari, Karmanasa-Harisiddhi, Dholahiti-Sunakothi-Chapagaun, and Nakkhu-Bhaisepati-Bungamati road stretches. One month ago, the parliamentary Development Committee had directed the government to complete the upgradation of road sections in the Valley by the end of the current fiscal. During a meeting, committee members had expressed dissatisfaction over the pace of the work. The committee had directed the Ministry of Physical Infrastructure and Transportation, the Urban Development Ministry, the Kathmandu Metropolitan City, Kathmandu Valley Development Commissioner, and the Dhobikhola Corridor Project to finish work on time.
#Kathmandu Metropolitan City #Kathmandu Valley Development Authority #Kathmandu Valley Road Improvement Project #KVDA #excavators #bulldozers #Tripureshwor-Kalanki
You May Also like: