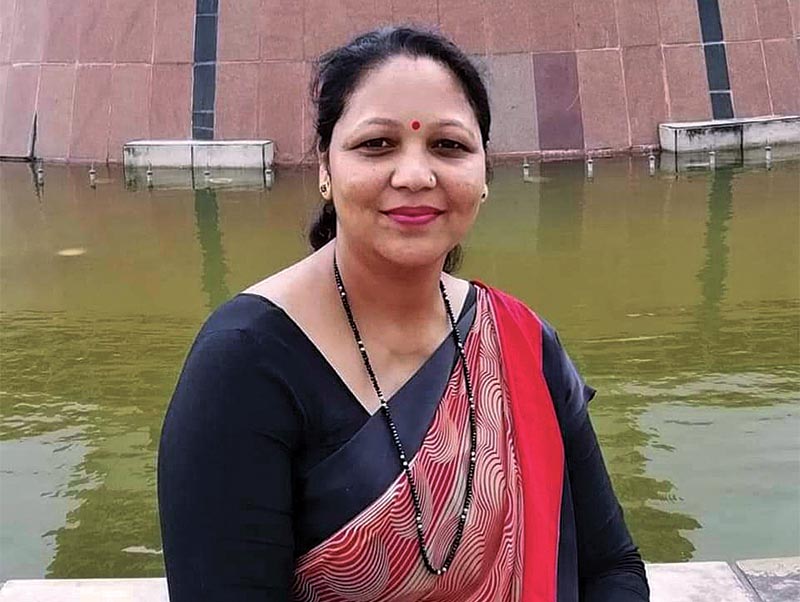 This undated image shows Nepal Communist Party (NCP) lawmaker Indu Kumari Sharma. Photo: THT
Kathmandu, April 12 Brothers, nephews and nieces of lawmaker Indu Kumari Sharma have not been able to obtain Nepali citizenship as the constitution does not ensure citizenship on the basis of mother’s nationality. Sharma’s father Brajendranath Dutta, a post-graduate in English and a resident of Gaya in Bihar, India, came to Nepal in 1966 and got settled in Surkhet district where he taught English in a college. Dutta married Nepali national Nanda Devi Thapa, but since Dutta could not obtain Nepali citizenship on the basis of his marriage to a Nepali national, his sons, Khagendra and Dipendra, and their children have not been able to obtain Nepali citizenship. Sharma, who represents the ruling Nepal Communist Party (NCP) in the House of Representatives could obtain naturalised citizenship as she is married to former lawmaker Ram Kumar Sharma. Sharma’s father died last year at the age of 85. Her brothers are married to Nepali nationals, yet neither her brothers nor their children have been able to obtain Nepali citizenship. The lawmaker says she, her husband and her brother Shyamendra had joined the CPN-Maoist during People’s War and Shyamendra was killed by security forces in 2004. Shyamendra’s name figured in the martyrs’ list and his widow got compensation for his sacrifice. “All my siblings and their children were born in Nepal, yet they have been deprived of citizenship,” Sharma added. Under the existing situation Sharma’s siblings, nephews and nieces are entitled to naturalised citizenship, but that is not a right. “My father struggled all his life in vain to obtain naturalised citizenship,” Sharma added. One of Sharma’s nieces slipped into depression due to her inability to enrol for M.Ed course in TU due to lack of citizenship. She said her brothers’ children wished the new citizenship law would be enacted soon to address their problems. “My nephews and nieces study in grades 11 and 12 and want to pursue their studies in technical field for which they would need citizenship,” Sharma added. She said she felt immense pain when her brothers curse their father for choosing to marry a Nepali and making Nepal his home. Sharma said the state had no right to deny citizenship to her siblings, nephews and nieces as they were born in Nepal and their mothers are bona fide citizens of Nepal. Sharma said her siblings were entitled to citizenship by birth as per the Interim Constitution’s provisions. However, when they approached the citizenship team in Surkhet, the team refused to issue them citizenship by birth, saying the central government would decide their case. She said life before 1990 was not that difficult even when somebody lacked citizenship, but afterwards, people without citizenship suffered a lot as they were required to produce citizenship for almost everything.
#Nepali nationality #Citizenship #Nepali citizenship #NCP lawmaker #Indu Kumari Sharma
You May Also like: