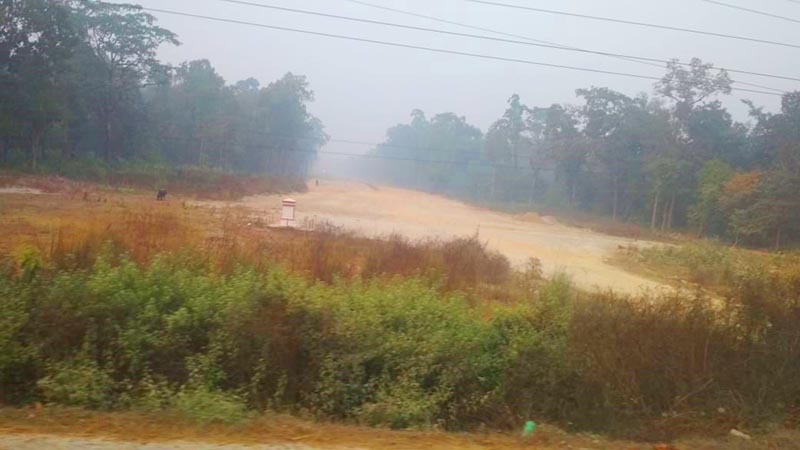 A view of Kathmandu-Nijgadh Fast-Track in Nijgadh of Bara district, on Saturday, December 1, 2018. Photo: Suresh Chaudhary/THT
Kathmandu, May 28 The National Concern and Coordination Committee of the National Assembly today directed the government to approve the detailed project report of the 76.2-kilometre Kathmandu-Tarai Fast Track. The South Korean joint venture company — Yooshin and Pyunghwa — had submitted the DPR to the Nepali Army on February 3. After one-and-a-half months study, the NA had forwarded the DPR to the government for approval. However, the government has yet to approve the DPR. “The NA is waiting for government’s approval,”said Project Head Yogendra Khand. The DPR should be approved through the Cabinet meeting. The NCCC has directed the government to clear the way for the NA to start work on the fast track by approving it at the earliest. The panel has also directed the NA to coordinate with concerned local governments and provinces while constructing the express way. Lawmakers in the committee urged the NA to complete the project on time. Ruling Nepal Communist Party(NCP) lawmaker Komal Oli said the NA should be careful while felling trees for the project. Project Head Khand informed mediapersons that the estimated cost of the project was Rs 213 billion.
#Kathmandu-Tarai Fast Track #Detailed Project Report #National Concern and Coordination Committee
You May Also like: