Speaker puts off House to "prevent tussle with judiciary"

KATHMANDU: In the wake of reinstatement of Chief Justice Sushila Karki and suspension of the impeachment motion moved against her, House Speaker Onsari Gharti on Sunday put off the Parliament for 11 days.

According to her, she was doing so to prevent potential confrontation between and betwixt the three organs of the state -- legislative, executive and judiciary -- on the eve of the local level elections.

Organising a press conference at the Parliament building, Speaker Gharti, who was elected to the Parliament from the Maoist party, asserted that the impeachment motion was the Parliament's prerogative and internal affair. 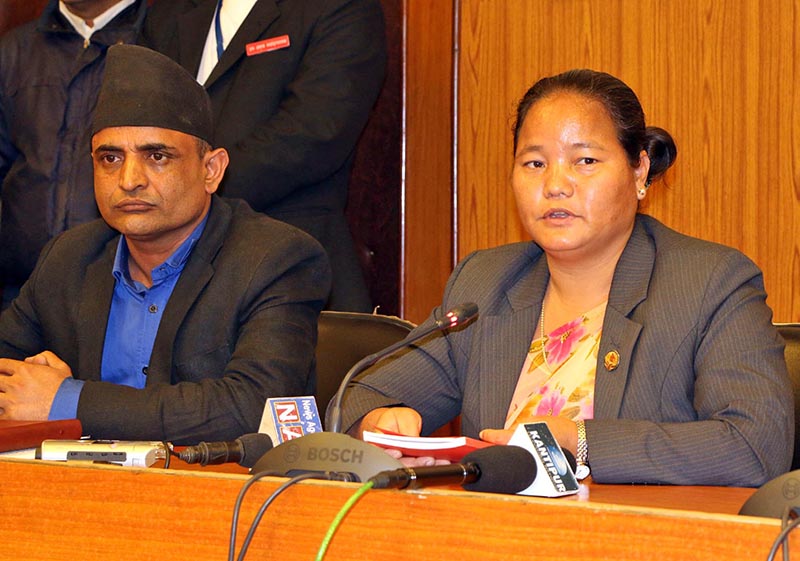 She expressed discontent over new developments, and maintained that all three organs of the State shall remain within their limits as defined by Nepal's Constitution as per the doctrine of separation of powers.

Reading out a written statement, she said she was putting off the House in order to facilitate talks between the stakeholders and resolve the issues till May 18.

The House has been scheduled for 3 pm on May 18.

Speaker organises press meet, House put off till May 18

KATHMANDU: The Legislature-Parliament, which was scheduled to be held on Sunday following an obstruction on May 5 by the opposition parties over the impeachment  motion against Chief Justice Sushila Karki, has been put off  until May 18.

Speaker Onsari Gharti Magar organised a press meeting at the Parliament building and informed that the House was put off to prevent confrontation between the judiciary and the legislature over the impeachment motion that was moved against Chief Justice Sushila Karki.

The Supreme Court has stayed the motion and reinstated Chief Justice Karki in the judiciary.

#Legislature-Parliament #parliament #Speaker Onsari Gharti Magar
You May Also like: