Stricter traffic rules in the offing 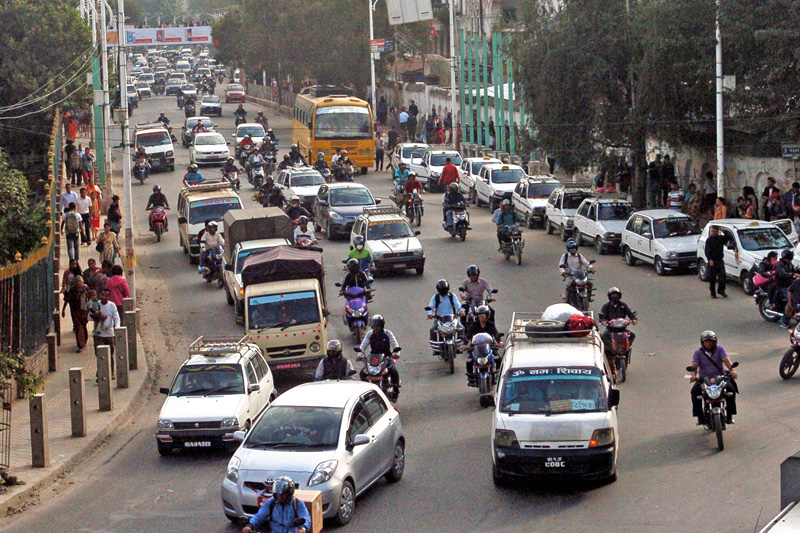 FILE: Vehicles plying a road in Kathmandu on Wednesday, October 19, 2016.Traffic has returned to normal in the Valley after Dashain. Photo: THT
Kathmandu, December 5 Department of Transport Management has amended Motor Vehicles and Transport Management Rules, making it mandatory for school buses to bring in schoolchildren before 9.30am and drop them before 4.30pm. Superintendent of Police Lokendra Malla, spokesperson for Traffic Police Headquarters (Baggikhana), said the new rules would apply inside Ring Road in Kathmandu after a week. Malla said his office decided to enforce new rules after a week, as they needed time to make the public aware of the new rules. He said service delivery vans would be allowed inside Ring Road only during specific hours. Service delivery vans, such as those loaded with groceries, construction materials and hardware stuff   would not be able to enter the core areas of the city between 9:00am and 11:00am and 4:00pm and 6:00pm. Vehicles transporting drinking water and other essential items would not be prohibited from entering the city any time. Malla said drivers would be prohibited from taking a right turn from places where they were not allowed to do so. “There will be designated places where drivers can turn right. There has been blatant violation of this rule but from now on we are going to strictly enforce the rule,” Malla added. Violators will be slapped with a fine of Rs 500, according to Malla. He said the new changes made to the Motor Vehicles and Transport Management Rules would help reduce traffic congestion and road accidents. Malla said enforcement of new rules would also entail traffic offices to add more personnel. “We have sought 500 additional police personnel,” Malla said. The Traffic Police Headquarters deploys over 1,300 police personnel, including trainees, in Kathmandu. Malla added that traffic rules enforcers were also planning to open roads under the bridges.
#traffic rules #Department of Transport Management #Lokendra Malla #Motor Vehicles and Transport Management Rules
You May Also like: