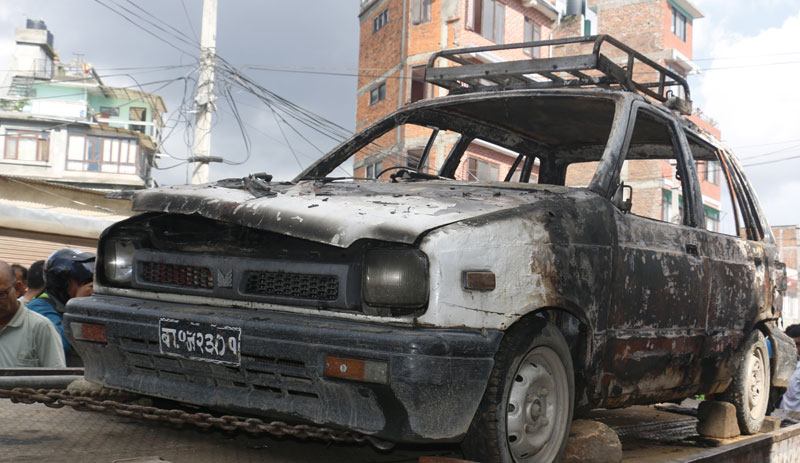 A taxi destroyed after some unidentified persons set it on fire, in Naya Bazaar of the Capital, on Friday, July 24, 2015. Photo: RSS
KATHMANDU: An unidentified group set a taxi on fire at the Dharagalli Chok of Naya Bazaar in Kathmandu on Friday afternoon. The taxi (Ba 1 Ja 2301) heading towards Balaju from Shorakhutte was completely destroyed in the fire. A gang of three to four persons stopped the vehicle and set it on fire, police said. Although the taxi driver Rakesh Tamang's hair caught the fire, he escaped any major injury. "Three to four persons came from the Dharagalli, stopped the taxi and forcefully opened the back door," driver Tamang said, "I felt that they were loading their stuff inside, but suddenly there was fire. I hastily got out of the taxi." According to him, the group fled to the same area from where they had come. The fire was brought under control by fire engine, police and locals. It has been suspected that some bandh enforcers set the vehicle on fire. The CPN Maoist had called the Nepal bandh for today.
#Kathmandu incident #Taxi set on fire #Nepal bandh #Taxi torched #Vehicle torched #Naya Bazaar
You May Also like: