KATHMANDU: Mother Teresa had once said, “I alone cannot change the world. But I can cast a stone across the waters to create many ripples.”

Standing in solidarity with womanhood, hundreds of people took time from their busy schedules to unite for a cause and celebrated the 108th International Women’s Day in unison, on March 8 in the capital.

Many women still go through some kind of violence and harassment one day or the other. Most of the perpetrators roam freely while the victims are expected to keep mum on the issue. In an era where experts are researching life on Mars, there are men in our world who still stereotype women, judging them from their clothes, opinions and actions, and putting themselves in a higher ground to behave with the women as they choose fit.

This kind of patriarchal mindset has contributed to different kinds of social problems, the most ghastly form of which has proven to be rape. In a bid to raise awareness and draw attention of the authorities who have the influence to make a difference on such matters, people from all walks of life participated in the 108th International Women's Day march today, raising various issues including gender equality, employment opportunities, disabilities, education, and #RageAgainstRape, among others.

THT Online spoke with some of the participants about their opinions and motivation behind them joining the rally:

Hima Bista, on behalf of all #RageAgainstRape campaigners 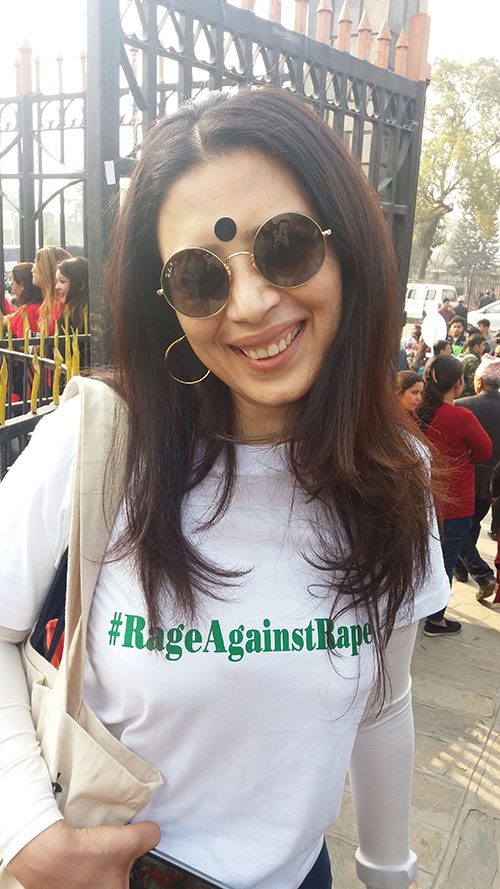 #RageAgainstRape actually started on the social media. Through that medium we have been able to bring individuals together for this important cause of raising awareness against rape and support for the victims. We however wanted to make our presence felt even outside the social media and amongst the public as it gives credibility to the movement.

The Ministry of Women, Children and Social Welfare has initiated the march today. It has also provided a toll free number where people can voice their opinions on various women violence and harassment issues, and #RageAgainstRape is one of them. Various groups present here are not part of any organisations but the Ministry has accepted their participation interestingly.

Actually, MoWCSW had called all organisations to gather in one place rather than get scattered, in order to support various women related issues. So we thought it is a good opportunity to show collective strength. Also most issues are interrelated and the issue on rape is not about isolation. So everybody has come together under the same banner. 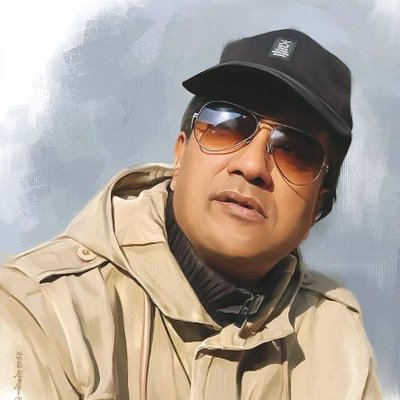 I have been expressing my thoughts on #RageAgainstRape on my social media accounts. Being a man, I cannot even imagine how anyone can abuse or rape someone. When I hear news about a six-year-old or a four-year-old or a 70-year-old being raped, I regret being a man. Having said that, I am not at all generalising, but rape is a horrendous crime. More than physical, it causes mental trauma. To live with the scar is very difficult. Hence, I made a point to come here today.

Such movements need to be organised to nudge the authorities for action. Policy makers, government authorities and those who can make a difference have never taken the issue seriously enough. Maybe they were afraid of losing their impact in the male dominated society.

If you ask me, those perpetrators must be hanged to death or castrated at least. But there must be some legalities that everyone talks about. More than the laws, it is the mentality that needs change. It is high time parents start changing how they raise their kids and teach both male and female child to respect each other. Though the situation has improved as compared to before, the parents also need to learn to treat both their son and daughter equally.

Willy Bergogne, Country Director of Humanity and Inclusion (In support of women with disabilities waiting 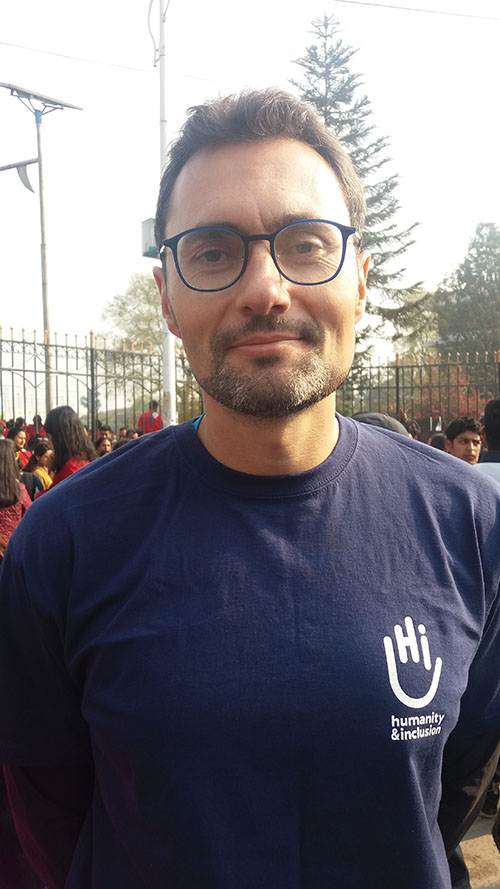 outside Shantivatika at Ratnapark in lack of access to go inside)

They have all been invited to come to celebrate the women's day. However, the ground is not accessible. We have been staying here for a long time claiming for access, claiming for equity, claiming for justice.

We hope that somebody will come to hear our complaint, which is not happening at the moment.

It is a big issue and I think it is representative of many situations in Nepal that these women in wheelchairs are facing, which to some extent is clearly a lack of respect for them and their conditions.

I am a journalist trying to cover issues that interest me. This is actually one of them. This is the first time the movement #RageAgainstRape has come to the streets. I contacted the coordinators on Twitter and here I am today.

I was not really aware of women fighting for their rights and empowerment here in Nepal. I am trying to write something about this. I am surprised to see the amount of people gathered here.

I was not expecting so many organisations raising their voice on different issues related to women’s lives. Every single part of this campaign has representation against violence, and for equality in job and salary; a little bit of all is here. As a woman, to witness this is really exciting and emotional at the same time.

Being a woman is already a gift given by the God and walking for women's cause is like representing all the women around the world.

As I work in the field of maternal and child health, I feel very proud, and this walk represents how women are together when it comes to them. Even though we are dominated in our country, the right of women is always their strength. This is the power of women.

Today, hundreds of men and women are here walking for women's rights. I hope it turns out to be one of the changing points for the new generation.

Many women with disabilities are facing problems. Lack of access is the major challenge faced by persons with disabilities, which include women. We have to raise our voices regarding these issues and our voice has to reach the concerned authorities. 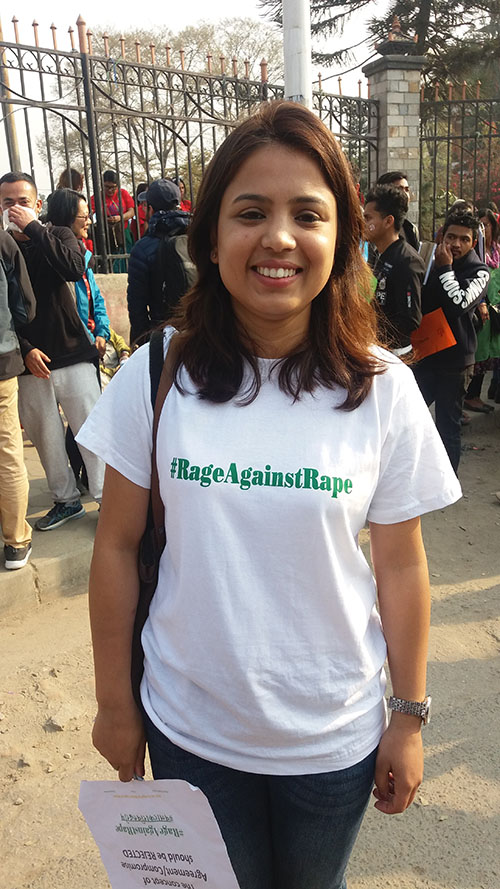 The reason behind marking the International Women's Day is that women's issues are for everybody, they are not just for women, but also for men. We are present in this rally to raise our concerns with the government to take forward women's issues by developing suitable policies. Such movements are very important. If such issues are not voiced, then they become hidden, nobody will come to know about them.

Rape cases for example are on a rise. To counteract this, strict rape laws must be developed. Talking about laws, policies and regulations should be developed that would facilitate immediate reporting of such cases, as and when it happens, following which immediate action could be taken against the perpetrators with a fast-track method. 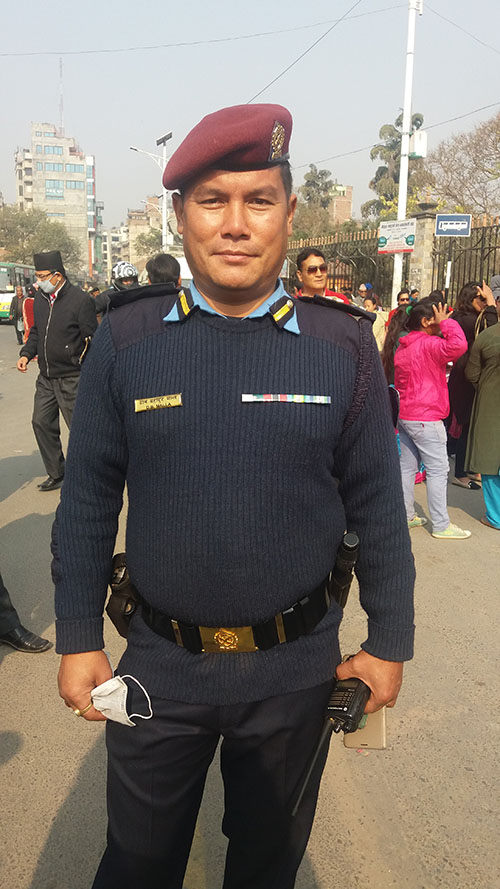 First of all, we are here as men expressing our solidarity towards women and women related issues. The team of our women security personnel is also participating in this march.

Despite coming a long way, the progress of women has yet to take a full shape. The society still has to move ahead in establishing the rights of women, and in terms of rights, men and women are one unit.

On the occasion of the 108th International Women's Day, I would like to give my best wishes to all women.

Best wishes from THT Online to everyone celebrating today.