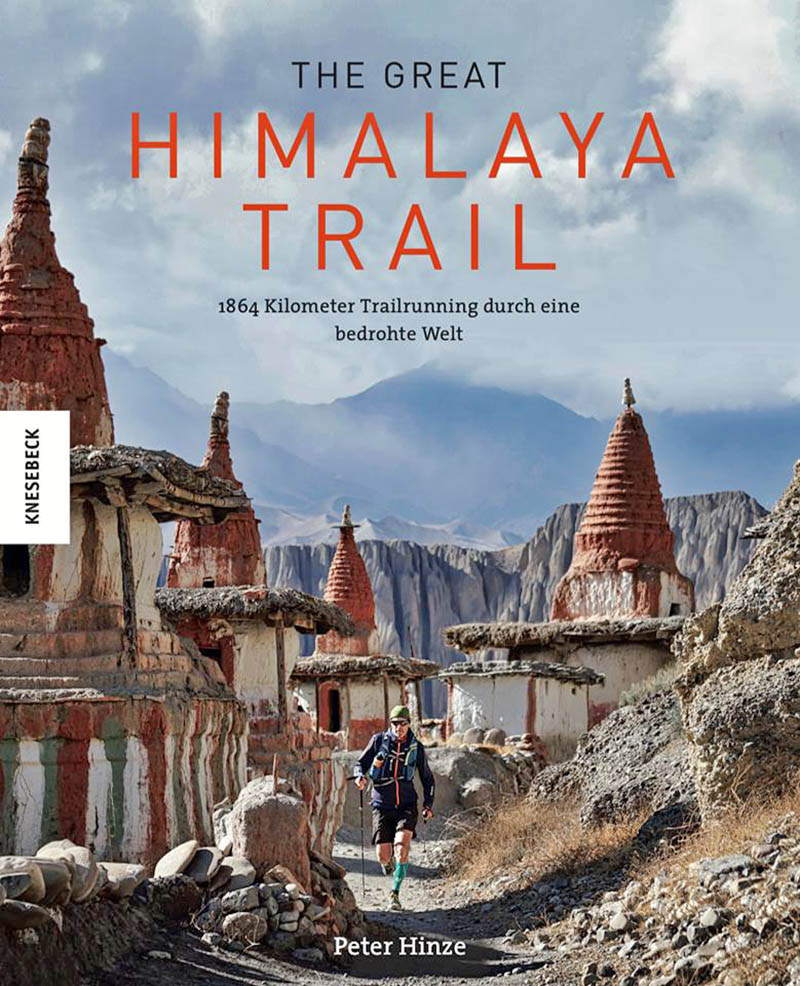 A cover page of Peter Hinze's 'The Great Himalaya Trail'. Courtesy: Peter Hinze
KATHMANDU: The Great Himalaya Trail, a book authored by a German traveller, has been chosen for the Internationale Tourismus-Börse Book Award. In a statement, Peter Hinze, author of the book, said Internationale Tourismus-Börse, Berlin will be presenting the ITB Book Award during the world’s largest tourism fair scheduled to be held in Berlin in March. The Great Himalaya Trail, written in German language, has also become the best selling book for about 15 years here in Germany. The book aims to promote Nepal in the international market, as stated in the statement. The Great Himalaya Trail is one of the longest and most difficult trails worldwide. At some sections, it reaches a height of almost 6,000 meters. At the same time, however, the path is also a lifeline for Millions of people and an age-old, increasingly endangered trade route. The freelance journalist and ultra marathon runner Hinze said, he travelled over 1,800 kilometers across Nepal to write this book. “I am also working for its English language edition.”

A cover page of Peter Hinze's 'The Great Himalaya Trail'. Courtesy: Peter Hinze
The author, Hinze gives up to date insight into the situation of the unique mountainous region and its inhabitants, which are the challenges of climate change, of civilization and road construction, the still visible aftermath of the 2015 earthquakes and geopolitical power interests of its neighbours have to, as stated in the statement. For all trail enthusiasts, the book provides many practical travel tips from planning to equipment included a short description of his daily stages. Since 1982 Peter Hinze travelled to the Himalayas 21 times. In the trail running field, the author has been working since 2003 on various ultramarathon races. He is a proven Himalayan expert and Nepal connoisseurs, reads the statment. The author, describes how dramatic the situation is already on the basis of his own brand-new experiences, in his reportage illustrated in the book. Due to rising temperatures, the majority of the more than 3,000 glaciers in Nepal have been exposed to a threatening ice melt for years, according to the statement. "At many altitudes, huge lakes have formed today that threatens to plunge into the valley as huge tidal waves," says Hinze, describing the locals' fears. In addition, the climatic changes indicate a significant decline in some vital plant populations and pastures. For example, doctors who have often used traditional natural remedies for centuries hardly ever find the plants they need. "A piece of culture and tradition is lost forever, Hinze said. The book features the daily life and the daily problems of the local people along the trail and is not focusing about the foreigner, who did a special trip to Nepal, which is mostly the main aspect of all books about Nepal, the author said in a statement.
#Peter Hinze #Internationale Tourismus-Börse #Internationale Tourismus-Börse Book Award
You May Also like: