4 held with 15 kg hashish from Pokhara 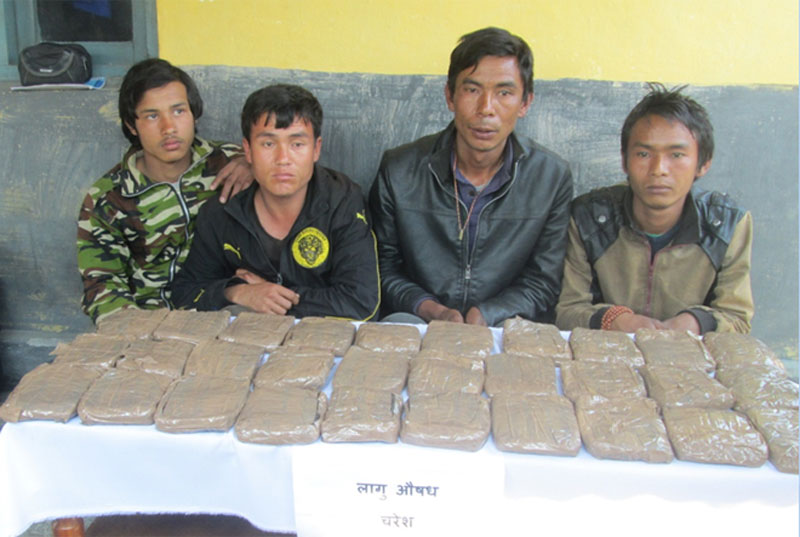 Police making public four persons arrested with 15 kg hashish on Thursday, February 18, 2016. Photo: Rishi Ram Baral
POKHARA: Police on Wednesday arrested four persons with possession of 15 kg hashish from Prithvi Chok of Pokhara. The suspects have been identified as Chandra Kumar Lo (29), Babulal Gole (31) and Santosh Khatri (20) of Agra VDC-2, Makawanpur and Man Bahadur Lo (39) of Agra VDC-3. According to Chief of the Narcotics Control Bureau (NCB), Rabindra Man Gurung, a police team dispatched from the Bureau, acting on a tip-off, confiscated the contraband from the possession of Gole and Khatri. It has been learned that they would collect the hashish from different remote parts of the country and sell the drug to their regular clients in Pokhara and Kathmandu. Police informed that the main persons behind the drug smuggling were the Lo duo and they used Gole and Khatri as 'porters'. Police nabbed them while they were transporting the hashish to Pokhara from Dhading at around 5 am yesterday. Earlier, police had rounded up five persons with 15 kg hashish from a hotel in Sarangkot VDC of Kaski district on February 4. Police have filed a case against them according to the Narcotic Drugs (Control) Act, 1976, Gurung informed.
#Pokhara #hashish
You May Also like: