‘Ban on women from working as maids in Gulf countries unfair’ 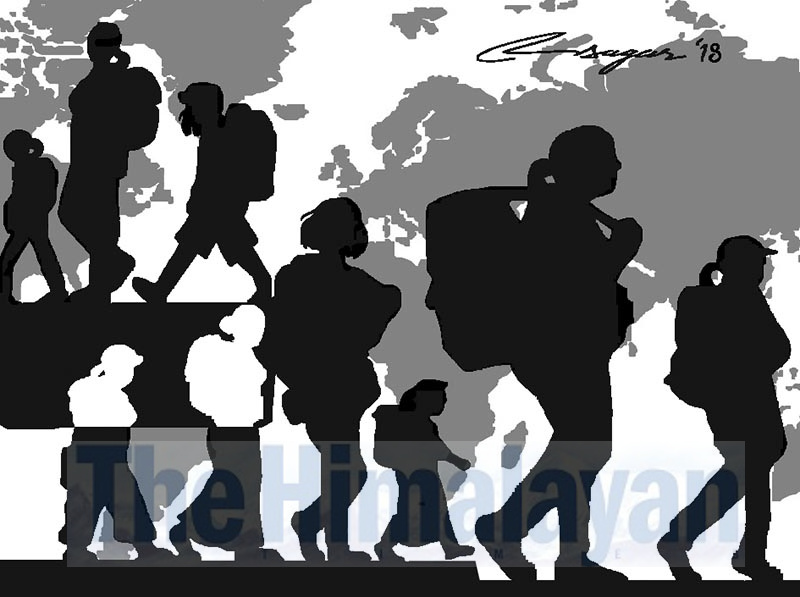 Illustration: Ratna Sagar Shrestha/ THT
Kathmandu, May 11 Despite concerns expressed by national and international rights bodies and activists regarding the government’s ban on Nepali women taking up jobs as housemaids in Gulf countries, the government, it seems, is in no mood to lift the two-year-old ban anytime soon. The United Nation’s CEDAW Committee had, in its concluding observations made in November, urged the government to guarantee all women equal access to employment within and outside the country, including by repealing discriminatory restrictions imposed on women aspiring to work abroad. Gender equality expert Bharati Silwal Giri said the ban had forced women wishing to work abroad to look for illegal ways to go to destination countries. This had led many of them to become victims of human trafficking. Human traffickers are using new routes, particularly via the northeastern states of India such as Mizoram and Manipur to take Nepali women to Myanmar and then to fly them to Gulf countries. Indian police had rescued 69 Nepali women from Mizoram in the last week of April and 140 Nepali women and 35 men from Manipur in the first week of February. Giri said the ban was a protectionist approach that allowed the government to evade accountability. “Women’s constitutional right to equality is still a mirage as they are unable to transmit Nepali nationality to their children on par with their male counterparts, enjoy equal rights in employment and lead lives free of violence and discrimination, she argued.” Gender and Migration Expert Sharu Joshi Shrestha and Adviser of People’s Forum for Human Rights-Nepal Som Prasad Luitel said there was no need to impose ban on women aspiring to work as maids in Gulf countries. “If the government is concerned about the security of Nepali women in Gulf countries, then it should strengthen measures that can promote Nepali maids’ security there,” Luitel said and added that the government could work out bilateral agreements with all the Gulf countries to minimise risk of exploitation faced by Nepali women. At present, officials of Nepali embassies and community leaders cannot visit the families where Nepali women work as maids in Gulf countries, but if the government signs agreements with labour recipient countries to change this, the risks Nepali women face can be minimised, he argued. Luitel also said employers of Nepali maids should be made to register with Nepali embassies in recipient countries and pay certain amount as deposit, which could be used to pay compensation to Nepali victims. Shrestha said while the government had legitimate concerns about protecting the interests of Nepali maids abroad, it had no power to impose blanket ban on those aspiring to work as maids in Gulf countries. She said the government should be mindful that laws and the constitution did not allow the government to discriminate against women even for their own protection. “The government banned Nepali women from working as maids in Gulf countries mainly because it looked at their issues from the angle of human trafficking, but this issue should be looked at from multiple angles. Women should be allowed to work abroad on par with men, but they should also be informed by government agencies of the risks associated with the job of maid,” she said, adding that there should be government service centres in all the wards to inform women about risks associated with foreign employment. Shrestha said the government should also think of expanding job markets within the country that would enable Nepali women to find jobs in Nepal itself. Secretary at the Ministry of Labour, Employment and Social Security Mahesh Prasad Dahal said that the government was holding dialogue with Saudi Arabia, UAE, Oman and Qatar for working out bilateral agreements and would allow Nepali women to work as maids in those countries only after signing the agreements.
#migrant workers #CEDAW committee #Banon women workers #golf countries
You May Also like: