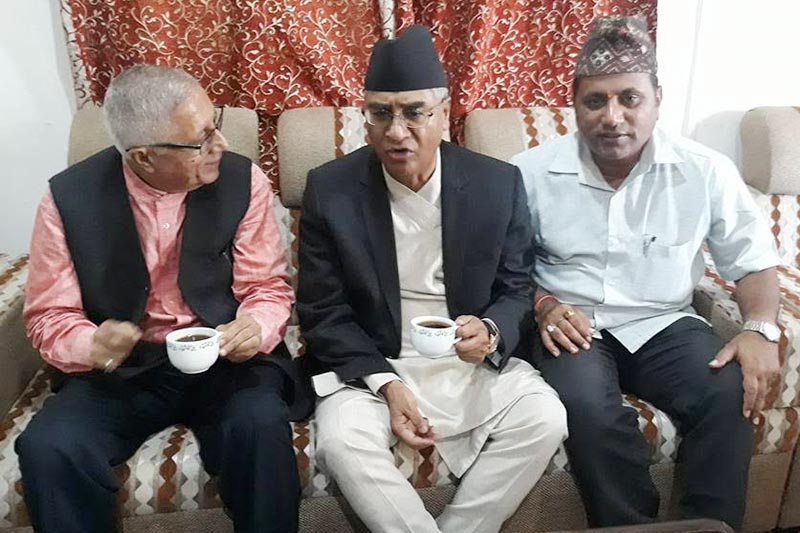 Prime Minister Sher Bahadur Deuba talking to mediapersons at Biratnagar Airport, in Morang, on Tuesday, September 12, 2017. Photo: THT
Biratnagar, September 12 Prime Minister Sher Bahadur Deuba, under criticism for forming a jumbo Cabinet, today said it was his obligation to expand the Cabinet. He further stated that the Council of Ministers would be expanded again, if necessary. Talking to mediapersons at Biratnagar airport Deuba said, “If the need arises, I might have to induct more ministers into the Cabinet.” Deuba clarified he had consulted with the Election Commission prior to Cabinet expansion and held that he had not violated the election code of conduct. The incumbent Cabinet comprises 54 members so far after Deuba expanded the Cabinet for the sixth time. “During transitional phase, it is an obligation to have more members in the Cabinet,” he added. Deuba had formed similar jumbo cabinet consisting of 48-members some 22 years ago. He asserted that the expansion had not undermined the poll code at all. “The government has a tradition of consulting with the Election Commission when it finds itself in trouble. I, too, consulted with the EC before the Cabinet expansion,” he clarified. Deuba said his government would table the Constitution amendment bill again in the Parliament. Stating that the bill had failed due to the CPN-UML, Deuba said the bill would be tabled again in the Parliament after the polls. He stated that his government was embracing the Madhesi people’s sentiments. “Since the statute is not carved in stone, it can be amended when the need arises,” Deuba said.
#Cabinet expansion #Prime Minister Sher Bahadur Deuba
You May Also like: