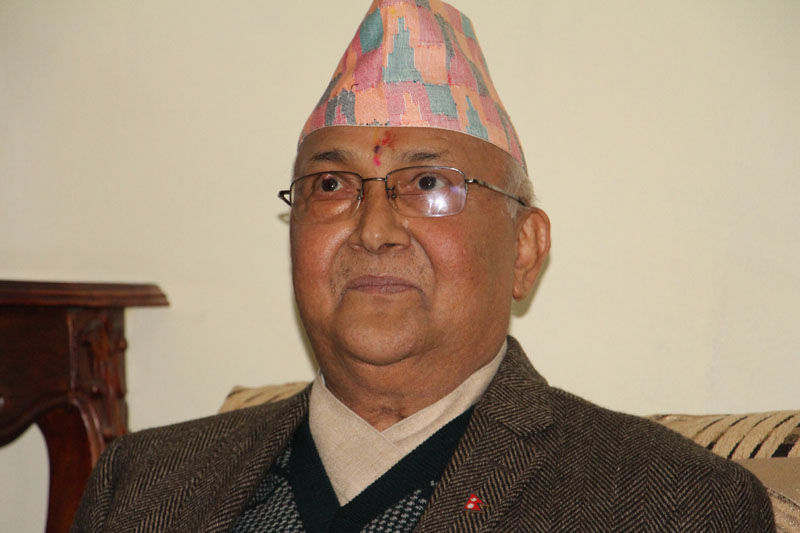 Prime Minister KP Sharma Oli at an interaction with the Reporters' Club Nepal Deusi Bhailo team, in Kathmandu, on Friday, November 13, 2015. Photo: RSS
Kathmandu, February 2 Prime Minister KP Sharma Oli today directed the newly set up Eminent Persons' Group to fulfil its responsibility without repeating  past mistakes regarding Nepal’s relations with India. While meeting with EPG members at his official residence in Baluwatar this evening, he suggested they to try to correct the mistakes of the past and strengthen Nepal-India relations without compromising national interest. The government on January 27 had constituted the EPG, whose four members included former foreign minister Bhekh Bahadur Thapa, former chief commissioner of the Commission for the Investigation of Abuse of Authority Surya Nath Upadhyay, former minister Nilambar Acharya and lawmaker Rajan Bhattarai. All of them had jointly called on PM Oli and sought his guidance to carry out its tasks. The EPG was set up to review all existing bilateral agreements with India, including the 1950’s Peace and Friendship Treaty and recommend “review, update, and adjustments” as per the present context to further strengthen relations between the two countries. The Indian side will also dispatch a four-member EPG to jointly carry out this task. “Let’s not repeat mistakes we committed in the past. Try to correct them, and move ahead without compromising national interests,” the prime minister’s Foreign Affairs Expert Gopal Khanal quoted PM Oli as telling EPG members. According to Khanal, while reviewing the existing treaties, PM Oli directed the EPG members to keep in mind national sovereignty and territorial integrity
#Eminent Persons Group (EPG) #Prime Minister KP Sharma Oli #past mistakes
You May Also like: