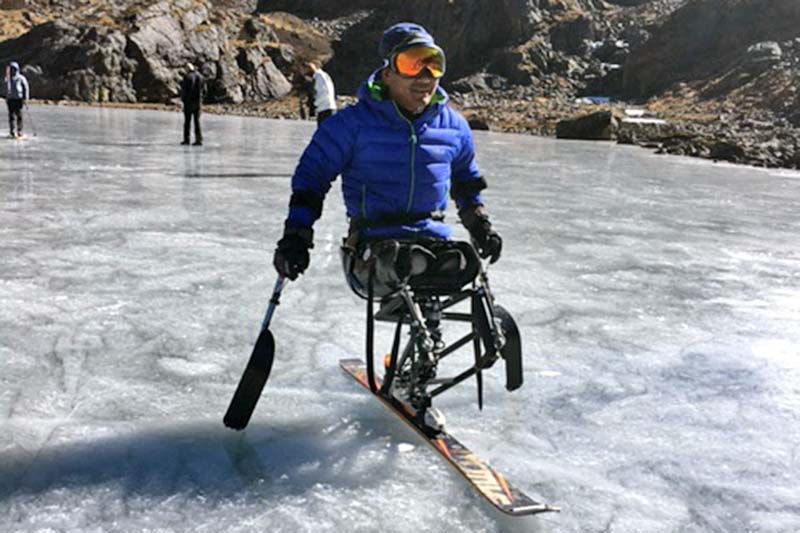 Former British Gurkha army, Hari Budha Magar, is seen skiing during the fifth winter ski festival held in Gosainkunda, on Tuesday, December 27, 2016. Photo Courtesy: Krishna Thapa Magar
KATHMANDU: A former British Gurkha soldier who lost both his legs in Afghanistan aims to be the first double amputee above the knee to climb the country’s highest trekking peak in the autumn season. “I am here to attempt to climb Mera peak (6,476 m) this autumn as a part of my training to conquer a dream to be on the top of the world’s highest peak in the upcoming spring climbing season,” Hari Budha Magar (37), shared with The Himalayan Times in Kathmandu while he was preparing to leave for Lukla along with a five-member team on Friday morning.

Former British Gurkha army, Hari Budha Magar, is seen skiing during the fifth winter ski festival held in Gosainkunda, on Tuesday, December 27, 2016. Photo Courtesy: Krishna Thapa Magar
Budha Magar, a permanent resident of Rolpa district, has served for the Crown with the RGR for 15 years. He was medically discharged from the rank of Corporal from the army in 2014 due to the injuries he sustained while serving in Afghanistan in 2010, after losing both legs below the knees. According to the Nepal Mountaineering Association, Mera peak is the highest permitted trekking peak in the country. The technical peak has often been used by the mountaineers for the adventure training activities. “I want to break the boundaries of disability and inspire others by climbing mountains,” the father of three said. According to him, the team would be in the Mt Everest region for three weeks in an attempt to climb the peak on the third week of September. “Mera peak is the best choice to train myself for the upcoming challenge.” This will also be a record climb as no one double amputee above the knee made it to summit till date, he claimed, with a confident that people with physical disability can do everything they did before the injuries. As a part of the extensive training, the climber had also stayed for 10 days in France’s Mont Blanc area a few months ago. The ex-Royal Gurkha Rifles soldier with prosthetic legs had also taken part in a ski race conducted in Gosainkunda last December. “I have already successfully conducted skydiving, alpine skiing, rock climbing and kayaking in different countries including the US, Germany and France.” Budha Magar who got married at the age of 11 and grew in the area which was hit hard by the Maoist uprising, has already been featured in "Love Your Garden" on ITV and in BBC One programme called ‘Home Under the Hammer’. He has chosen the expedition slogan ‘Conquering Dreams’ for Mt Everest climb, according to Christopher Paul, Managing Director at the Myrmidon Expeditions. Krishna Thapa Magar, Managing Director at the Himalayan Ski Trek said that Budha Magar would be the first bilateral, above knee amputee to attempt climbing Mt Everest.  The US-based Myrmidon Expeditions and Nepal’s Himalayan Ski Trek would jointly handle an expedition to Budha Magar. Budha Magar, the man of courage and determination always wants to be a role model inspiring people, not only those who are physically injured, but also to show the world the courage and determination that physically impaired people have, according to the organisers.
#Mount Everest #Mt Everest #British Gurkha soldier #Mera Peak #Hari Budha Magar #ex-Royal Gurkha Rifles soldier #amputated soldier
You May Also like: