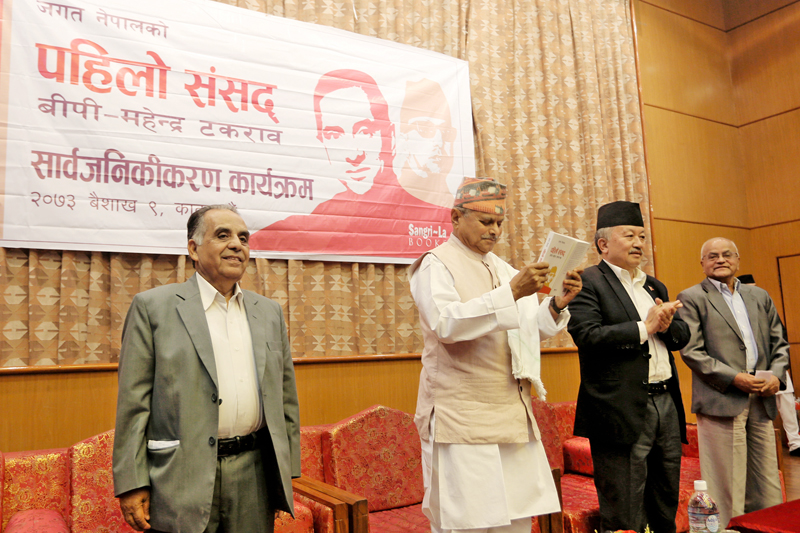 Former President Ram Baran Yadav unveils a book titled 'Pahilo Samsad-BP Mahendra Takarav', written by journalist Jagat Nepal, in Kathmandu on Thursday, April 21, 2016. Photo: RSS
Kathmandu, April 21 Former president Ram Baran Yadav today stressed on bridging the divide between the plains and the hills if political achievements were to be safeguarded. “Extremism and jingoism and do not augur well for the country. However, power-centric approach of the leaders has created a challenge in resolving the grievances over the new constitution,” Yadav said launching a book “First Parliament: BP-Mahendra Conflict” written by journalist Jagat Nepal. Yadav said that the “coup of 1960” could have been repeated had there been another person as the head of the state when the new constitution was promulgated on September 20, 2015. “I respected the verdict of over 90 per cent people’s representatives and promulgated the new constitution despite grievances in Madhes. If there were another person in the position of the president, the 1960’s coup could have been repeated. However, I didn’t let it happen and promulgated the constitution,” said Yadav. He said the 70-year political transition would come to an end only after the dispute over provincial boundaries was settled and elections were held to the local bodies, provinces and federal parliament. “We lost eastern and western parts of the country in the past. We should understand that a solution will not arrive by insulting or dominating others,” said Yadav. Former speaker Daman Nath Dhungana said democracy and Nepal’s first parliament in 1959 were like unwanted babies and internal and external interests kept Nepal in transition till the new constitution was promulgated. “Our politicians, including prime ministers, were unable to uphold the people’s mandate. So, we should find the roots our country’s instability and address the issue accordingly,” he said. Former speaker Subas Chandra Nembang said the tradition of the opposition creating prolonged obstructions in the Parliament should be brought to an end. “The CPN-UML obstructed the House for the longest time in the past. Nepali Congress and Unified CPN-Maoist have also obstructed House businesses. Obstructing the majority has become a tradition and it is inappropriate,” he said. Professor Lok Raj Baral said Nepal’s politics never progressed in sequence due to personality clashes between and among key political players. The 304-page book written by journalist Nepal incorporates interesting facts, dialogues held between and among top political figures, including BP Koirala, then king Mahendra, last Rana prime minister Mohan Shumsher and Ganesh Man Singh, among others. It also deals with Nepal’s transition and its causes, journey of parliamentary elections, tussles for power, wrong practices in the Parliament, performance of first elected government and tussles between people and the king.
#new constitution #Nepali Congress #Unified CPN-Maoist #Subas Chandra Nembang #Ram Baran Yadav #Daman Nath Dhungana #Jagat Nepal
You May Also like: