Ganga Maya to tell her story to the world 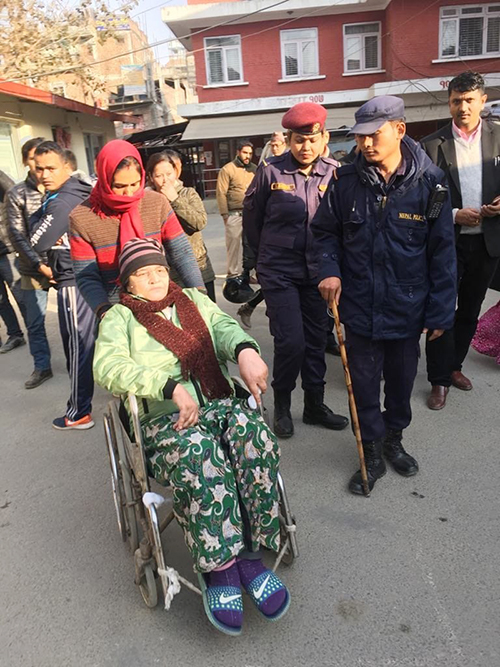 Ganga Maya Adhikari on a wheelchair, accompanied by police in civvies and uniform, at District Administration Office, in Kathmandu, on January 1, 2019. She applied to get her first passport. Photo: Ujjwal Satyal/THT
Kathmandu, January 1 Ganga Maya Adhikari’s crusade seeking justice for her son knows no bounds. She is all set to reach out to the international community to tell the story about her son’s murder and reluctance expressed by the state to send the criminals behind bars. Ganga Maya, who staged fast-unto-death four times between January 2013 and July 2018, was seen in a wheelchair at the District Administration Office, Kathmandu, today. She was there to get her first passport. She has not prepared her travel itinerary yet, but her lawyer said she might visit the United Kingdom and the United Nations Headquarters in New York or Geneva to provide details of her son’s murder in July 2004, when the Maoist insurgency was at its peak. She said she had decided to go abroad to tell her story as she had not been delivered justice despite knocking the doors of the government and courts for years. “I’ve been patiently listening to the government. But it has always disappointed me,” said the 58-year-old, who was flanked by well-wishers and surrounded by police at the District Administration Office. “Now it’s my time to speak and I will tell my story to the world.” Ganga Maya’s 18-year-old son Krishna Prasad was killed by Maoists in Chitwan on June 6, 2004. An FIR alleging murder was registered at District Police Office, Chitwan, on June 7, 2004. Krishna Prasad’s elder brother submitted names of 13 persons to the police on December 11, 2005, accusing them of committing the crime. Krishna Prasad’s parents waited for almost seven years to bring the culprits to justice. But after the state did not take initiatives to arrest the murderers, they began their hunger strike in January 2013. The strike ended after 47 days following the government’s commitment to ensure justice. But after the main accused, Chhabilal Poudel, was released on bail, the Adhikari couple resumed their hunger strike. As the hunger strike entered the 334th day, Ganga Maya’s husband breathed his last. His body has not been cremated and is lying unclaimed at TU Teaching Hospital, Maharajgunj, since his death on 22 September 2014. After her husband’s death, Ganga Maya staged fast-unto-death twice. She ended her last hunger strike in July 2018 after the government expressed commitment to fulfil all her demands, including putting the murderers of her son behind bars. But on September 10 the Chitwan District Court acquitted 12 people accused of having a hand in the murder of Ganga Maya’s son. “I have no option but to seek the international community’s support,” said Ganga Maya, thanking her well-wishers. “I’m an illiterate person, but I’ve come this far because of support provided by benevolent people. They will also support my upcoming journey to seek justice.” Human rights activists and Ganga Maya’s advocates will accompany her on her foreign trips. “We might visit the UK as Rudra Prasad Acharya who had allegedly shot Ganga Maya’s son has been hiding in the country,” said advocate Om Prakash Aryal. “We have to embark on this journey as Nepal as a state has been unable to deliver justice.” Aryal alleged that people who murdered Ganga Maya’s son were close to the ruling Nepal Communist Party (NCP). “The murderers are getting political protection, preventing authorities from conducting proper investigation,” said Aryal.
#international community #Ganga Maya Adhikari #son’s murder #justice for her son's murder
You May Also like: