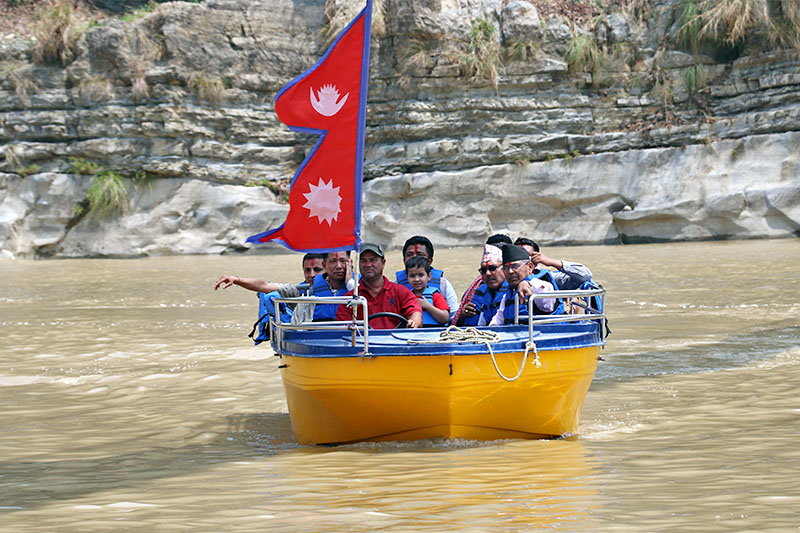 Officials conducting a motor-boat test ride to operate waterway along Bagmati River in Makwanpur district, on Sunday, April 14, 2019. Photo: Prakash Dahal/THT
HETAUDA: At a time when Prime Minister Oli-led government has been criticised for sharing vague dreams with people of operating ships and trains in the country, the government has conducted a motor-boat test ride to operate waterway along the Bagmati river connecting Raigaun of Makawanpur with Canteen of Rautahat district, coinciding with the new year. According to Bagmati Rural Municipality Chief Sarkhesh Ghalan, an 11-seater motor boat conducted a test ride after Krishna Prasad Dahal, Chairman of the Finance Committee under the House of Representatives from Makawanpur Constituency made an effort towards it. Meanwhile, the rented motor boats will operate on the river. The government will run its own boats after coordinating with the provincial and federal government later, Ghalan said. "With the operation of waterways in the area, tourism development will be boosted which will help uplift the economy of the region," Ghalan expressed optimism. "At a time when the central government is giving priority to waterways to connect Nepal with the ocean, this waterway would help in promoting tourism and uplifting the lives of people living in the area," Dahal said. A total of Rs 2 million out of 10 million was allocated from the Local Infrastructure Development Coordination Programme under the Lawmakers Development Fund. Speaking after inaugurating the programme, Rita Ghimire, Chairperson of the Waterways Transport Consumers Committee said, with the allocated budget of Rs 2 million, all hurdles would be cleared to run motor-boats. Likewise, on the occasion, Province 3 Provincial Assembly Member Prem Bahadur Pulami, NCP (NCP) central member Kedar Neupane, Bhimphedi Rural Municipality Chair Hidim Lama, Bagmati Rural Municipality Chair Sarkesh Ghalan, Bakaya Rural Municipality Deputy Chair Sarala Bolakhe among others were present. The motor-boat ride would facilitate locals from Raigaun in Makawanpur to those in Sarlahi, Rautahat and Sindhuli districts after the waterways come into operation.
#Waterways #Krishna Prasad Dahal #Local Infrastructure Development Coordination Programme #Lawmakers Development Fund
You May Also like: