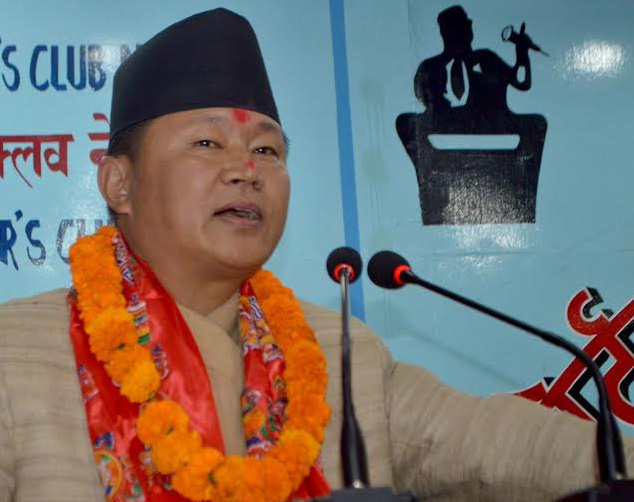 Minister for Information and Communication Sherdhan Rai speaks with journalists in Kathmandu, on Friday, November 6, 2015. Photo: Reporters' Club
BUTWAL: Minister for Information and Communications Sherdhan Rai, who is also the spokesperson of the government, stated that the incumbent government has clarified the illusions spread against the features of the new Constitution. He added that the Prime Minister KP Sharma Oli's visit to neighbouring countries China and India helped to remove the disinformation about the Constitution. At a press conference organised by the Press Chautari Nepal, Rupandehi chapter today, Rai added that the high level political committee formed to resolve the provincial delineation issues will get full shape soon as it was delayed due to the 13th national convention of the Nepali Congress. Minister Rai further said that the government is committed to fully implement the Constitution and lead the nation on the way to prosperity. He further said that the preparations were in progress for holding local bodies' election and the date would be announced in the government's policy and programme before budget. Minister Rai informed that the government would release its budget on May 28. He asserted for classification of the media for making them dignified, adding that a directive for the same would be issued.
#new constitution #Nepali Congress #Prime Minister KP Sharma Oli #Minister for Information and Communications Sherdhan Rai #incumbent government #Press Chautari Nepal Rupandehi
You May Also like: