It will take some time to get rid of feudalism: Gandaki Province CM 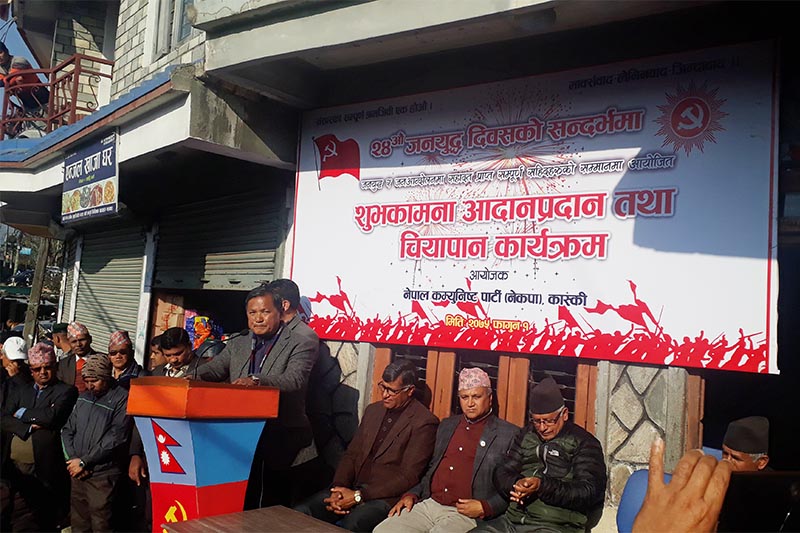 Gandaki Province Chief Minister Prithvi Subba Gurung addresses a tea reception programme organised by Nepal Communist Party (NCP) Kaski to exchange greetings on the occasion of 24th anniversary of People's liberation war, in Pokhara, February 13, 2019. Photo: Rishi Ram Baral/THT
POKHARA: Chief Minister of Gandaki Province, Prithvi Subba Gurung said that it would take some time to get rid of the feudalism from the country. In a tea reception programme organised by Nepal Communist Party (NCP) Kaski to exchange greetings on the occasion of 24th anniversary of 'Maoist People's war', in Pokhara, CM Gurung said, "As we have abolished the monarchy, rest of the feudalism in the country would itself peacefully come to end." CM Gurung recalled the promulgation of Constitution and the elections held in local, provincial and federal levels. He expressed his belief that populism fortifies itself after bringing feudalism to an end. Further, he claimed that the ruling government had established itself as populist and opined that people would gradually become prosperous and the change would come in their livelihood. He suggested that two communist parties in the country  — one leading people's war and another peaceful way — that unified, now needed to move ahead fortifying the populism. He also added that they were able to move ahead peacefully through the medium of the constitution. The chief minister opined that in the period of four years, the Maoist party would further become bigger if it supported populism. He stressed the need for Truth Reconciliation Committee to expedite its task in revealing the facts in collaboration with victims. The chief minister lamented the federal government's move in weakening the provincial and local levels and urged the federal government not to embrace such politics. On the occasion NCP (NCP) lawmaker and former minister for Health, Khagaraj Adhikari stressed the need for bringing factionalism within the party to an end. On August 26, 2015, Supreme Court issued a writ of certiorari and mandamus against peace directives formulated by the Ministry of Peace and Reconstruction to the issuance of identity cards for the conflict victims thus the government replaced the word ‘Maoist people’s war,’ with ‘armed conflict.’
#Monarchy #Maoist people’s war #Prithvi Subba Gurung #feudalism #Gandaki Province #Nepal Communist Party (NCP) Kaski
You May Also like: