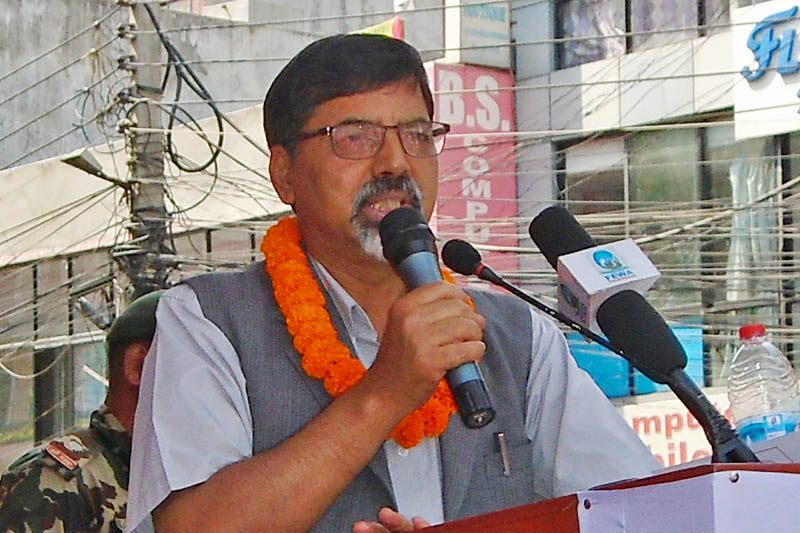 Minister for Energy Janardan Sharma speaks at a programme in Pokhara, on Friday, April 28, 2017. Photo: RSS

JANAKPURDHAM: Home Minister Janardan Sharma has said the government has directed all the security agencies to beef-up security arrangement for the upcoming local polls in province number 2 on September 18.

Addressing a security meeting in Janakpur on Sunday, Minister Sharma directed all the security bodies to make security arrangement for creating a conducive environment for the voters to coast their vote in fair, free and transparent manner.

The meeting was organised by the Home Ministry in Janakpur on Sunday, eight Chief District Officers, Police Chiefs of the regions and among other officials were present.

On the occasion, Minister Sharma urged the security bodies to remain alert towards untoward activities in the district as the election code of conduct has already been implemented.

Briefing the meeting, Minster Sharma warned that there should not be any security lapses during the third phase of local polls.

"2017 is the Election Year, third phase local polls is in priority right now, government will simultaneously hold the provincial elections on November 26 and Parliamentary elections on December 7, for the implementation of constitution and federalism in the country," Minister Sharma added.

For the implementation of the constitution, the government is committed to hold the local levels elections in province number 2 slated on September 18 on fair, transparent and fearless manner.

Minister Sharma also urged the voters to cast their votes without any fear as the Home Ministry has made the security arrangement accordingly.