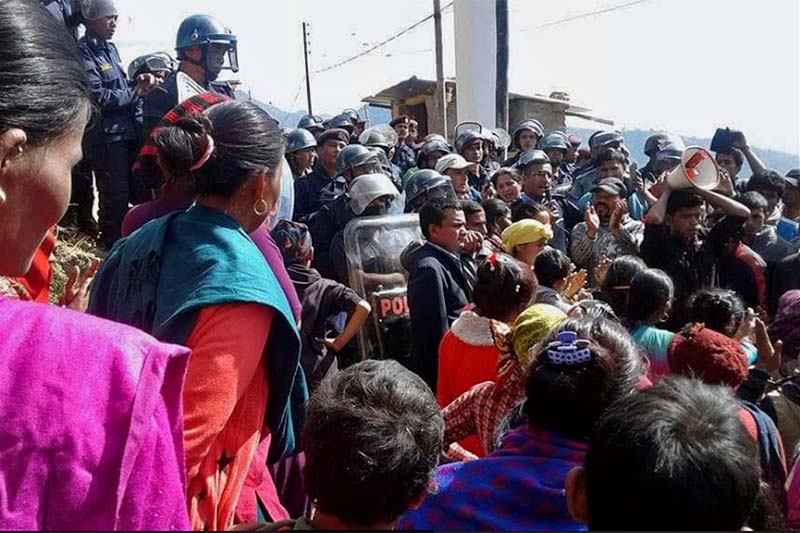 Locals of Jajarkot district headquarters, Khalanga, stage a protest in front of the District Police Office, seeking action against a policeman allegedly involved in the murder of a local woman, on Wednesday, February 8, 2017. Photo: Dinesh Kumar Shrestha
JAJARKOT: Police looking into a mysterious death of a local woman near the district headquarters of Jajarkot district revealed that a staffer of their own organisation was involved in the case. Head Constable Kamal BK fatally attacked Radhika Sunar (28) with a khukuri on Saturday night and threw the body into a local river, Pasagaad, police said. The body was recovered from the river the next morning. BK was posted at the District Police Office. The DPO today said police have received a remand from the District Court to carry out the further investigations against him. Meanwhile, police freed the victim's husband Dal Bahadur after concluding that he was not involved in the case. He was detained immediately after the murder. After it was revealed that the policeman was involved in the attack, local women staged a protest in the district headquarters on Wednesday, seeking a stern action against the culprit. They also demanded that the victim's children be provided with basic necessities. The protesters had picketed the DPO today. Meanwhile, DSP Bhabesh Rimal said BK would be tried at the court for the murder and the law would take action against him.
#Jajarkot #Woman murdered #woman found dead #Jajarkot murder #Jajarkot crime
You May Also like: