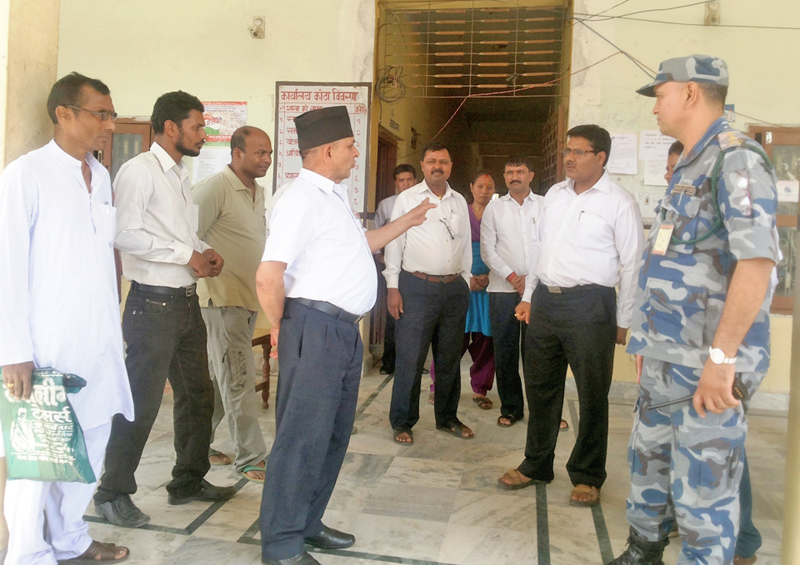 CDO Nara Hari Baral with his team cross-checking at the District Development Committee Office, in Gaur, Rautahat, on Monday, April 18, 2016. Photo: THT
Rautahat, April 18 As many as 60 government employees, along with office chiefs were unavailable at their respective offices during cross-checking carried out by District Administration Office, Rautahat, today. The DAO today conducted cross checking at four government offices in Gaur after stakeholders complained that they could not get their work done on time due to lack of staff in the offices. Staffers at District Development Committee, District Technical Office, Drinking Water and Sanitation Division Office and Gaur Municipality Office were found to be absent during cross-checking. The monitoring team led by Chief District Officer Nara Hari Baral, assistant CDO Ram Raj Subedi, SP Ganesh Regmi and APF DSP Madan Singh Bista, along with administrative officers had reached the DDC office where local development officer Bandana Jha, along with 18 other staffers were absent from office. Similarly, as many as 19 staffers, including chief Mukti Bhatta, were not present at the district technical office. Likewise, Chief Anil KC and 17 staffers at division office, and Chief Udaya Devkota and six staffers of Gaur Municipality were absent from their workplaces. Meanwhile, Jha said she was at the local development ministry in Kathmandu for official work when the inspection was carried out. “I was at the ministry to file some documents on Sunday,” she said over telephone.
#District Administration Office #Gaur Municipality #district development committee #Drinking Water and Sanitation Division Office #District Technical Office #Rautahat chiefs
You May Also like: