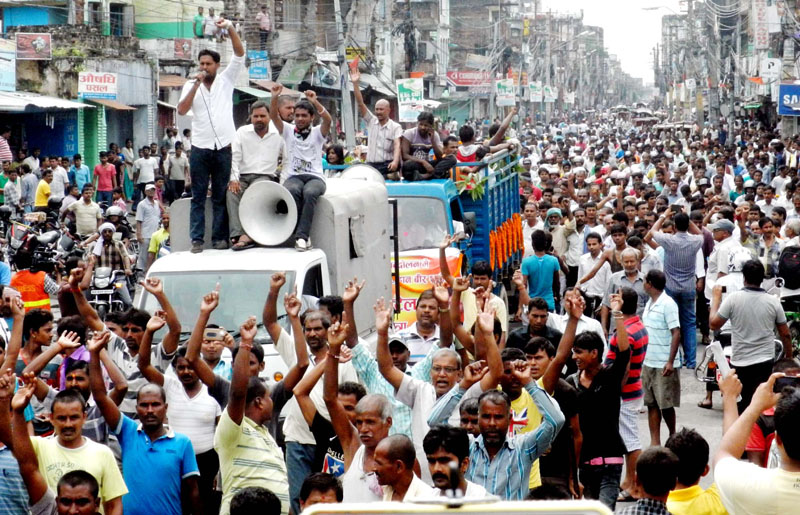 Funeral procession of protester Shatrughan Patel (28) of Pakahamainpur VDC-8 who was shot dead by security personnel during a demonstration in Birgunj on Sunday, carried out in Birgunj on Wednesday, September 23, 2015. Photo: Ram Sarraf
BIRGUNJ: Thousands of people participated in the funeral procession of a protester who was shot by security personnel during a demonstration in Birgunj on Sunday. The funeral procession of the deceased Shatrughan Patel (28) of Pakahamainpur VDC-8 in Parsa district has been carried out from Narayani Sub-Regional Hospital, rallying  around the town of Birgunj, to cremate the body in Pakmainpur today. Thousands including Chairman  Anil Jha and General Secretary Shiva Patel of Nepal Sadbhawana Party, Vice-Chairman and lawmaker Lalbabu Raut Gaddi and central member Birendra Yadav of Federal Socialist Forum-Nepal participated in the funeral. The participants shouted slogans against the government and three major parties. The leaders dedicated condolence with garlands to Patel's body. Tight security had been arranged at different places. Thousands joined the funeral procession after the curfew had been lifted from 6 am to 10 pm on Wednesday.
#Birgunj #demonstration #protester #demonstrator #funeral procession #Killed #protester shot
You May Also like: