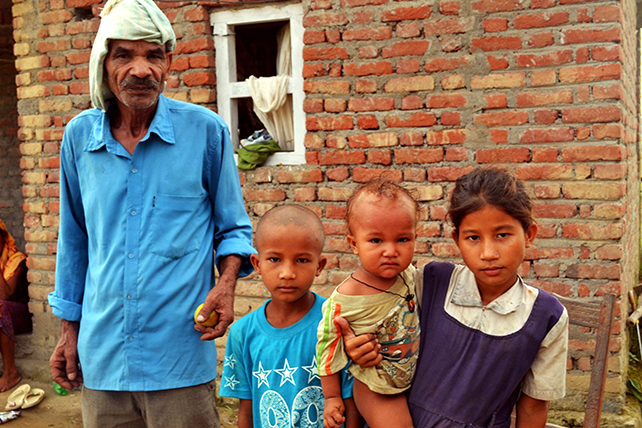 Family of police constable Janak Negi. His father 60 year old BirSingh Negi is seen along with his children. Negi passed away while undergoing treatment in the Tikapur incident. His children’s future is in a dilemma after he passed away.
Dhangadi, August 23 Speaking at the anniversary of the gory incident in Tikapur that saw the murder of eight police personnel in a riot last year, the victims of the incident have demanded that the government ensure justice for them instead of trying to placate them with different facilities and incentives. On August 24 last year, thousands of Tharuhat and Madhes-based parties’ supporters had gathered in Tikapur, Kailali, defying the administration’s prohibitory order and in the riot that ensued, murdered eight police personnel including a senior superintendent of police. “We don’t want incentives and facilities in return for the cruel murder of our kin. We want justice from the state,” said Sarada Bohora, wife of Keshav Bohora, a policeman murdered in the incident. She expressed frustration at the sluggish process of justice. “We met ministers and leaders who have assured us they will serve justice, but it seems unlikely we will get it ever,” she added. Janga Bahadur Saud, the grandfather of two-year-old Tek Bahadur who was killed by rioters in the same incident, is also awaiting justice desperately. “For my grandson, neither the Intact far-west campaign nor the Tharuhat/Tharuwan campaign made much sense. But he was killed anyway, his innocence notwithstanding,” he said. The murdered infant’s mother Yashoda questioned the rationale behind the recent government action of declaring those dead in the incident martyrs, and said such moves wouldn’t make up for the unforgivable act of murder. Further, Tikapur incident victims have cautioned the state against granting a getaway to the perpetrators. Seti Zonal Police Office Dhangadi Chief SSP Laxman Neupane, inspectors Balram Bista and Keshav Bohara, constables Laxman Khadka and Lokendra Chand of Nepal Police, Armed Police constables Ram Bihari Chaudhary and Lalit Saud, and constable Netra Bahadur Saud’s two-year-old son Tek Bahadur were murdered then. A case is under way at the district court of Kailali against 28 persons accused of involvement in the deadly carnage.
#Kailali #Madhes-based parties #Tharuhat #Tikapur #SSP Laxman Neupane #Tikapur victims
You May Also like: