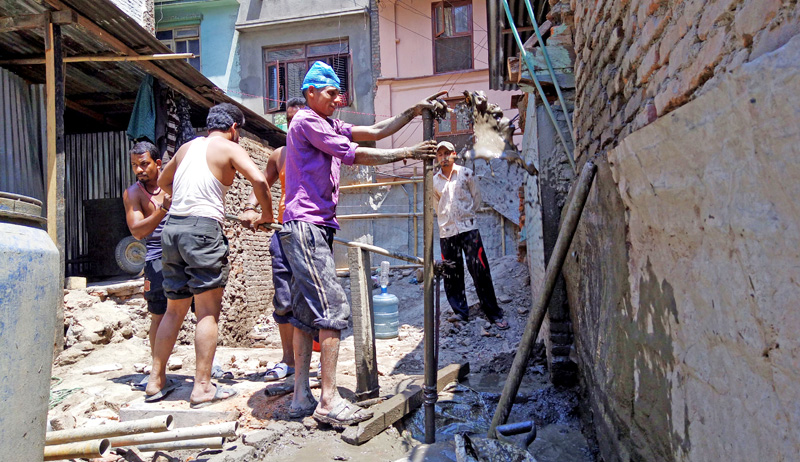 Locals of Nhyokha digging the earth to instal a shallow tubewell, contributing to the depletion of groundwater level in the Kathmandu Valley over the years, on Wednesday, May 11, 2016. Photo: THT

The groundwater level has gone down by eight metres in just five years in Pepsicola, Kathmandu, thanks to over-exploitation of natural water sources.

A report prepared by Groundwater Resource Development Board reveals that a fall of eight metres in water level was measured in Pepsicola from 2008 to 2013.

The Board stated that there seemed disturbance in recharge area on the northern side of Kathmandu and over-exploitation of groundwater through deep tubewells, industries and apartment buildings contributed to reduced water table in Pepsicola in a short span.

“Over-exploitation of groundwater and industrialisation, deep tube wells, shallow tube wells, water entrepreneurs, private sector and apartments centred in Pepsicola and its vicinity may have contributed to depleted water level,” senior Divisional Hydrologist of the Board Surendra Raj Shrestha told this daily.

He added, “Disturbance in natural recharge areas of Pepsicola could be another major cause that brought the level of water down.”

Shrestha said unmanageable and rampant over-exploitation of groundwater was the main reason behind the falling levels. With a view to collecting water-level data from different locations, the board has been monitoring deep tube-wells regularly in four places since 2001.

According to Kathmandu Upatyaka Khanepani Limited, water demand in the Kathmandu Valley is 360 million litres per day.

But due to inadequate availability of water, KUKL supplies only 95 million litres per day during summer and winter and 154 million litres in the rainy season. It obtains 50 per cent water from groundwater sources by means of shallow and deep tube wells.

There are no details and reliable studies about groundwater and shallow tube wells. In 1990, JICA suggested that only up to 15 million litres of water could be drawn from the groundwater source each day.

Dr Suresh Das Shrestha, a hydro-geology expert, said though there was no detail and reliable study carried out in Nepal, depletion of groundwater level has triggered the risk of structural impact on land.

“Continuous depletion of water level definitely hampers the soil composition and speeds up the water crisis,” he said.