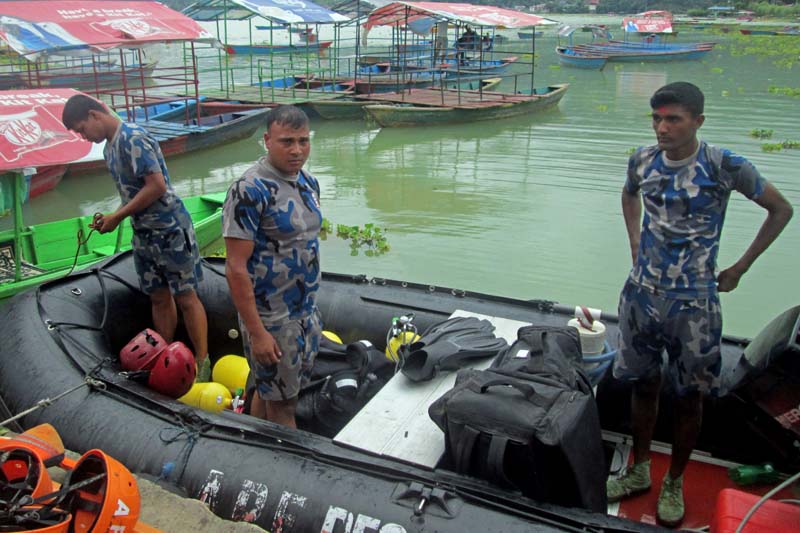 Armed Police Force's divers looked for the missing duo in Phewa Lake up to 50 feet down on Wednesday. Photo: Rishiram Baral

POKHARA: Rescuers are yet to find any clue about the whereabouts of two youth who went missing in the Phewa Lake after their boat overturned on Monday afternoon.

Six persons including boat driver were rescued as the boat they were on board capsized in the grand lake while Pratik Shrestha (19) of Maharajganj and Elin KC (23) of Basundhara, Kathmandu disappeared along with the boat.

Looking for the missing duo, trained rescuers from the Armed Police Force dived up to 50 feet down into the Phewa Lake today.

Divers from the Armed Police Force's Kurintar-based Disaster Management Training Center were summoned to help in the search operation. They, however, failed to track the missing youth and boat.

Uncertainty over the exact location of boat capsize has created troubles to the rescuers.

Also, muddy water underneath the Phewa Lake has made search operation more difficult, according to SP Phanindra Paudel at AFP's Malepatan-based Kalika Battalion.

Armed Police Force's divers looked for the missing duo in Phewa Lake up to 50 feet down on Wednesday. Photo: Rishiram Baral

The kith and kin of the missing duo have also arrived in Pokhara.

Among the six persons who were rescued, Saugat Shrestha, Samrat Gautam, Roshan Neupane and Deepak Neupane of Kathmandu, and Bidur Dhital of Makwanpur have been discharged from the Gandaki Medical College.

None of the people on board the ill-fated boat had worn life-jacket while setting off for a recreational boat ride. While coming back to the Lake Side from the other side of Phewa Lake, the boat capsized midway at around 5 pm.